As Curtis Houck demonstrated at NewsBusters on Wednesday, the historic step of including four outside-the-DC Beltway journalists at White House press conferences via Skype is not sitting well "with many establishment media types." 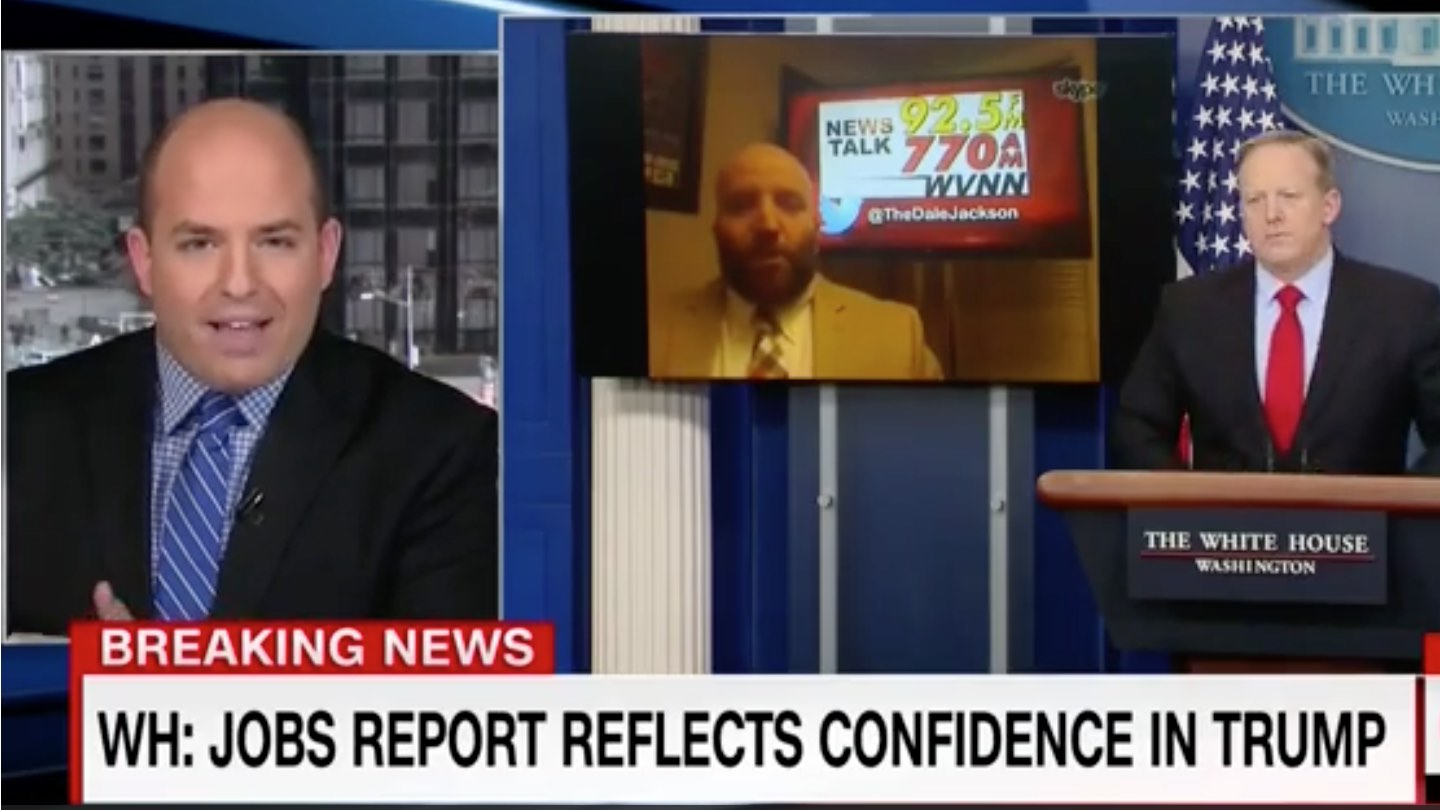 The aggrieved folks at CNN are particularly upset. Houck noted that the network's Dylan Byers reported, in Houck's words, that the move "upset some in the White House press corps" because it would "divert attention from what in-house reporters wanted to talk about."

Based on Brian Stelter's reaction to Friday's Skype presence of an Alabama talk radio host, it would appear that another of their objections is that outside questioners might draw attention to what Beltway-area reporters don't want to talk about.

As seen in a video segment posted by Ian Schwartz at Real Clear Politics, Blitzer set Stelter up by asking him to react to the current design of Trump Press Secretary Sean Spicer's daily briefings, which Blitzer alleged are "more produced" with "Skype questions." Stelter obliged in a predictably disingenuous manner:

WOLF BLITZER: Brian Stelter is with us as well.

Let's talk about these press briefings themselves. Jim Acosta raised the issue -- they're a bit more produced with special guests, Skype questions, timing. What's your take?

BRIAN STELTER: Not to be the pessimist here, but it is beneficial to have local reporters weighing in asking questions. It does, however, take away time from the journalists who are in the room, who spend every single day covering these foreign and domestic issues for the entire country.

One downside of these Skype questions is that they're bringing in conservative talk radio show hosts as well. They certainly have a role to play. Conservative talk radio show hosts like Dale Jackson who asked a question from Alabama certainly have an important role to play in the media ecosystem but when you're having questions from people like that, you're not getting as many questions about important domestic and foreign policy matters.

So there's just a tension here, back and forth. I think Spicer wrapped up pretty early today. He was not asked about that Bowling Green Massacre mistake by Kellyanne Conway, said that on MSNBC yesterday. She's not apologized for it and Spicer did not follow-up.

But I agree with your guest, the importance here of establishing a baseline about the unemployment numbers and the jobs figures. The fact that this White House seems to be agreeing with the numbers and not disputing them, not trying to challenge them, is significant. The president woke up and tweeted a whole lot of things, a whole lot of wild things this morning. And there was barely any time to follow-up about that in this briefing today. Yes, it's a relatively normal day as David was saying but we're still seeing a lot of disruption on a daily basis, via the president's Twitter account.

Stelter's viewers who don't know better will certainly believe that the question from conservative talker Dale Jackson must not have been about "important domestic and foreign policy matters" relevant to "the entire country."

Let's go to the briefing transcript and see what Jackson's question was:

DALE JACKSON: Sean, thank you very much for taking questions from outside the elite media bubble there in D.C. My question is about immigration. Donald Trump made this the forefront of his campaign, the foundation of it, yet the DACA and DAPA programs still exist. And I learned from a member of Congress yesterday that the Trump administration is still issuing the work permits that (inaudible) individuals.

Question one is, when are these programs going to be ended? And question two, when will they stop issuing work permits to these individuals?

MR. SPICER: Thanks, Dale. I think as you know, Secretary Kelly just assumed office. We are reviewing these programs. We've made it very clear that we'll have further updates on immigration referring to DACA and DAPA. The President has made significant progress on addressing the pledge that he made to the American people regarding immigration problems that we face, and I think we're going to see more action on that in the next few weeks.

Last time I checked, Brian Stelter, immigration was an "important domestic and foreign policy matter" about which "the entire country" is concerned.

Americans who follow the news around the country are deeply concerned about the impact of DACA (Deferred Action for Childhood Arrivals) and DAPA (Deferred Action for Parental Accountability). Arguably encouraged by DACA's existence, a combined 108,000 unaccompanied children crossed southwest border in fiscal 2014 and 2015 alone. A virtually identical number of "family unit apprehensions" also occurred during those two years.

DACA gives unaccompanied children "a renewable two-year period of deferred action from deportation and eligibility for a work permit." DAPA involves "a three-year, renewable work permit and exemption from deportation" for "certain illegal immigrants who have lived in the United States since 2010 and have children who are either American citizens or lawful permanent residents."

The impact? "Just under half of the nation’s unauthorized immigrant population – estimated currently at about 11 million – could have potentially benefited" from these two programs.

Even though a Supreme Court deadlock kept in place a Circuit Court ruling blocking these programs from being implemented, Jackson's question would appear to indicate that the Obama administration and its still-in-place apparatchiks inside the Trump administration are proceeding as if the ruling doesn't exist. If that's indeed the case, the talk host's impatience with the new administration is fully justified, and Spicer's answer appearing to confirm the lack of immediate action is wholly unsatisfactory.

The Beltway press corps inside the "elite media bubble" to which Jackson referred had eight years to ask President Obama and his press secretaries meaningful questions about illegal immigration. All too often, what we got instead were wastes of time, including a breathless inquiry about an Obama weekend father-daughter outing.

At the same time, Stelter clearly considered whether Kellyanne Conway would "apologize" for her "Bowling Green massacre" mistake and parsing President Trump's tweets far more important matters than Jackson's apparently unimportant question on illegal immigration. If this really reflects what journalists inside the Beltway "really want to talk about," Team Trump ought to seriously consider going to an all-Skype, all-outside-the-Beltway format.

For the record, Conway admitted her error at roughly the same time Stelter was bloviating, and the world can now go on.