At the Associated Press, the Castros' Cuban 'Revolution' Has Never Ended, and Lives On

Geraldo Rivera is far from the only member of the U.S. press with what Fox News's Pete Hegseth described Saturday as a "reflexive desire" to see Communist dictator Fidel Castro, whose death was announced Friday night, as a "cult hero." Entire major U.S. news outlets fell prey decades ago.

Thus, it wasn't at all unexpected that the Associated Press's Saturday report after Castro's death at times overflowed with virtual admiration. What was novel, and offensive, is how the AP's Michael Weissenstein and Peter Orsi twisted the dictionary to adopt the Cuban government's Communist Party line that the country has for almost six decades been, and apparently will continue to be, in a state of "revolution."

The headline at the AP pair's story lionized how Castro "defied the US for 50 years." Their opening sentence continued that theme (bolds are mine throughout this post):

Fidel Castro, who led his bearded rebels to victorious revolution in 1959, embraced Soviet-style communism and defied the power of 10 U.S. presidents during his half-century of rule in Cuba, has died at age 90.

Other all too predictable story elements included the following:

Weissenstein and Orsi described much of Castro's brutal early years accurately, but still ruined things by avoiding any direct term describing Fidel as the brutal dictator he really was, and by downplaying the scope of his regime's brutality.

The AP pair correctly tagged Fulgencio Batista, whom Castro overthrew, as a "dictator." But though they quoted President-Elect Donald Trump's description of Fidel as "a brutal dictator" in reacting to his death, Weissenstein and Orsi themselves never applied that or any similar tag, and were clearly evasive in their avoidance, as seen in the following paragraph:

Within months, Castro was imposing radical economic reforms. Members of the old government went before summary courts, and at least 582 were shot by firing squads over two years. Independent newspapers were closed and in the early years, homosexuals were herded into camps for "re-education.

None of what is described in that paragraph has a darned thing to do with "radical economic reforms." Castro set about to impose a totalitarian Communist dictatorship, and tragically succeeded.

The above paragraph's citation of 582 executions was the only reference to any kind of death toll during the Castros' regime. That figure barely, and irresponsibly, scratched the surface:

Additionally, an uninitiated reader of the AP report might actually believe that the killing spree ended after "two years." 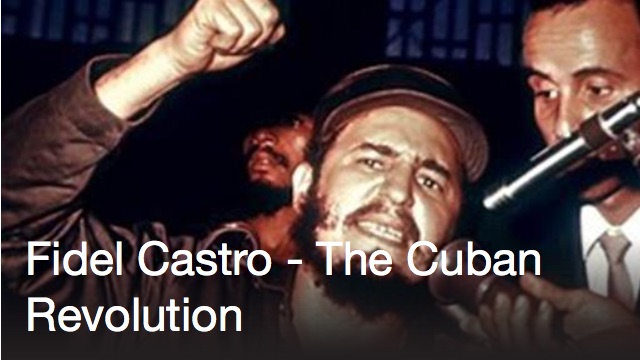 The biggest reveal in the AP pair's story is its frequent employment of forms of the word "revolution." Weissenstein and Orsi went there a stunning 11 times, in at least two instances very inappropriately.

The relevant dictionary definition of "revolution" only includes "an overthrow or repudiation and the thorough replacement of an established government or political system by the people governed." In other words, the Cuban "revolution" genuinely ended once Fidel Castro assumed and consolidated his power.

But two telling passages in the AP story gave the word unsupported meaning, effectively betraying that fact that Havana bureau chief Weissenstein and former Havana correspondent Orsi have, at least in their "journalism," adopted the Castros', and the Cuban government's, Communist vision of the world:

... With a shaking voice, President Raul Castro said on state television that his older brother died at 10:29 p.m. Friday. He ended the announcement by shouting the revolutionary slogan: "Toward victory, always!"

... His (Fidel's) longevity allowed the younger brother (Raul) to consolidate control, perhaps lengthening the revolution well past both men's lives.

Based on these two passages, we're supposed to understand that the Cuban "revolution" which began nearly 60 years ago has never ended, and still lives on.

Only hardened Communist regimes and their apologists employ such language. From all appearances, those apologists include Weissenstein, Orsi and the AP editors who reviewed their work, which has likely been sitting in draft form for months or even years awaiting Fidel's death. Thus, in reporting on Castro's death, the AP pair and the AP as an institution willingly — and compliantly — adopted the Communists' definition of "revolution."

The AP's rose-colored fascination with Castro — and tyrants in general — goes back decades.

As to Castro, the longstanding hero worship is perfectly captured in the third photo in a series of about 20 found here (click on the blue icon at the bottom right of the first photo to see the entire series). The caption to the photo there of Castro in Communist China in 1995 reads: "Castro’s death is a reminder of how the communist axis has changed beyond recognition since the ideologically charged era when the bearded revolutionary cut a dashing figure on the world stage alongside leaders like Mao Zedong."

The AP's fondness for and willingness to work with the world's worst tyrants and of complying with their wishes allegedly goes back at least to the days of Adolf Hitler's Nazi Germany. As covered in the UK Guardian in March, based on the work of a German historian:

... (AP) was the only western news agency able to stay open in Hitler’s Germany, continuing to operate until the US entered the war in 1941. It thus found itself in the presumably profitable situation of being the prime channel for news reports and pictures out of the totalitarian state.

In an article published in academic journal Studies in Contemporary History, historian Harriet Scharnberg shows that AP was only able retain its access by entering into a mutually beneficial two-way cooperation with the Nazi regime.

The New York-based agency ceded control of its output ... promising not to publish any material "calculated to weaken the strength of the Reich abroad or at home."

(The Nazi regime) required AP to hire reporters who also worked for the Nazi party’s propaganda division. One of the four photographers employed by the Associated Press in the 1930s, Franz Roth, was a member of the SS paramilitary unit’s propaganda division, whose photographs were personally chosen by Hitler.

AP issued an initial denial of the charges, but to my knowledge has not responded further, despite saying that it would engage in “reviewing documents and other files in and beyond AP corporate archives, in the US and Europe, to further our understanding of the period.”

In modern parlance, until the wire service presents definitive proof to the contrary, it is more than reasonable, based on the German historian's research, to contend that it cooperated with Nazi Germany for over eight years in creating "fake news."

In its obvious errors and omissions, as well as in describing what is currently happening in Cuba as the continuance of a "revolution," as AP did in its Saturday coverage of Fidel Castro's death, the wire service appears to be extending a "fake news" tradition going back over 80 years.