At Roll Call on Tuesday, Jonathan Allen went after four-term Republican Alabama Senator Jeff Sessions with a vengeance. Even before Sessions had been nominated for a government position by President-Elect Donald Trump, Allen wrote that "the Senate should reject him for any post that requires confirmation," calling Sessions "a partially reconstructed baiter of minorities" who "is beyond the ideological fringe."

Friday evening, Tucker Carlson at Fox News went after Allen for his piece on Sessions after Trump nominated earlier in the day to be his administration's Attorney General. It did not go well for Allen — nor should it have, considering that they were discussing the alleged racism of a guy who, as a U.S. Attorney from 1981-1993 — until he, along with all 92 other U.S. Attorneys, was fired by Bill Clinton — helped virtually put the KKK out of business in Alabama.

There is also no evidence that Jonathan Allen has any idea that Jeff Sessions played a major role against the Klan:

As a U.S. Attorney he filed several cases to desegregate schools in Alabama. And he also prosecuted Klansman Henry Francis Hays, son of Alabama Klan leader Bennie Hays, for abducting and killing Michael Donald, a black teenager selected at random. Sessions insisted on the death penalty for Hays. When he was later elected the state Attorney General, Sessions followed through and made sure Hays was executed. The successful prosecution of Hays also led to a $7 million civil judgment against the Klan, effectively breaking the back of the KKK in Alabama.

In the video segment which follows, showing the first four-plus minutes of an eight-minute interview, Fox's Carlson got to just two of the over-the-top passages in Allen's column.

The Roll Call writer's responses and assertions unwittingly revealed a laundry list of some of the classic media smear tactics and fundamentally dishonest thought processes he and so many other "journalists" employ (HTs to Twitchy and Gateway Pundit; video begins in the middle of the first sentence in the transcript which follows; full Fox segment is here):

Transcript (bolds are mine throughout the remainder of this post):

TUCKER CARLSON: Many on the left are arguing that Jeff Sessions is morally unfit to serve as Attorney General. Among them, our next guest, columnist Jonathan Allen of Roll Call. Jonathan, thanks a lot for joining us tonight.

CARLSON: So you wrote a column about Sessions before today's announcement, but recently. And I gotta say, it's one of the most unfair things I think I've ever read.

JONATHAN ALLEN: Okay. Well, I appreciate your other —

CARLSON: Like it's almost like a pure download from the DNC website. You say, among many other things, "Sessions is a favorite of Stormfront, the white nationalist web community founded by former Klansman Don Black." Is there any evidence that he's had contact with Stormfront, endorsed Stormfront, or are you just smearing him on the basis of their endorsement of him?

ALLEN: Well I, look, I'm not saying he's like a member of Stormfront or anything.

CARLSON: What are you saying?

ALLEN: I'm saying that he is a favorite of people who, who hold bigoted views. And that's not, and by the way —

CARLSON: So if someone you don't like says something nice about you, you're tainted by that?

ALLEN: Well, I think if you look at the history and the pattern of Jeff Sessions, he's said things over the course of time that should make people —

CARLSON: No, you said something really specific. You said he was endorsed by Stormfront. What is the, I'm sure he would disavow that immediately. So why would, why is it fair to write that?

ALLEN: He hasn't disavowed it that I know of.

CARLSON: Oh so you think he agrees with Stormfront? Is that what you're (unintelligible) for that?

ALLEN: I don't know. I don't know. But the point that I would make about Jeff Sessions and the larger point of the column is, Americans should have a right to feel that they are going to be equally protected under the law. And Jeff Sessions, over the course of time, and I pointed out a lot of other things in that column, has said and done things that should make people, some people feel uncomfortable with the idea that he's going to treat them fairly under the law.

CARLSON: I don't think, here's what people have a right to, is the expectation that if someone's going to throw out a charge that it's substantiated. It's not just by implication. In this McCarthyite way, you say among other things, and I'm quoting now, "Surely Sessions wouldn't try to resegregate the American Armed Forces in which he served." Really?

Jonathan Allen, surely you wouldn't batter a child. What does that mean? Nobody's suggesting —

ALLEN: You're right, I wouldn't. 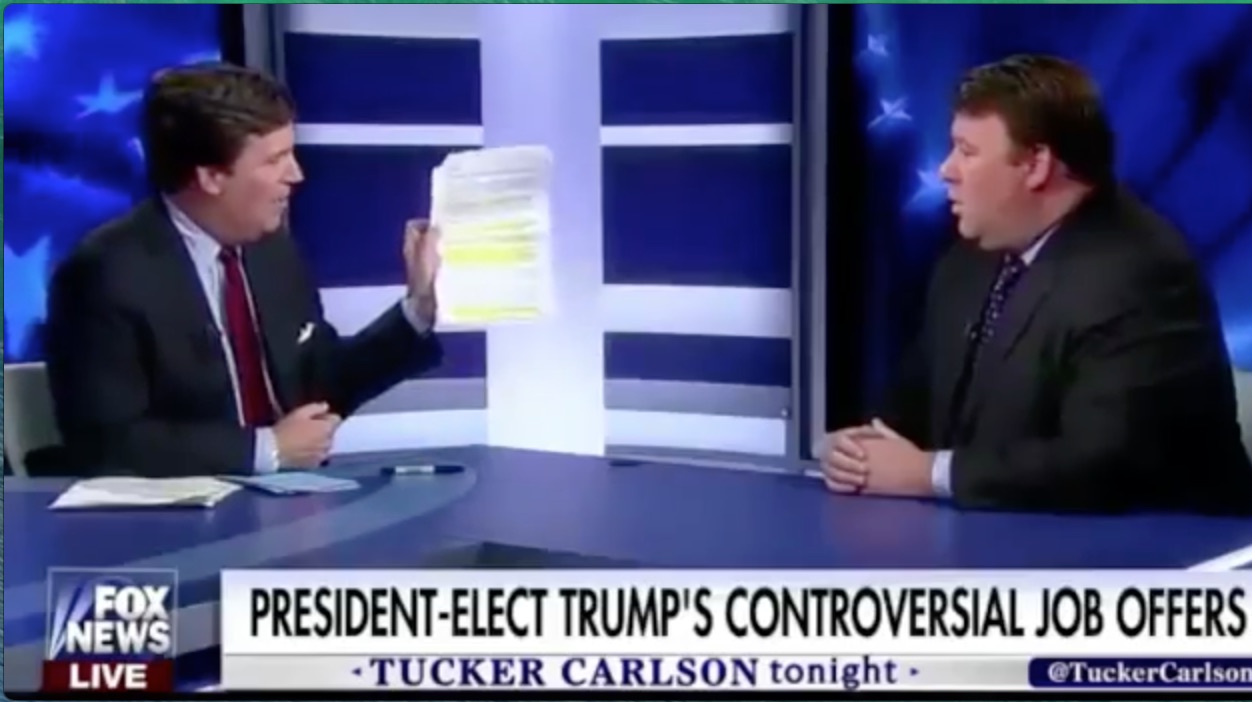 CARLSON: Yeah, but nobody's suggesting he would resegregate the Armed Forces. Why would you put something up like that up?

ALLEN: Jeff Sessions has been, he's been opposed to the Voting Rights Act in the past.

CARLSON: Opposed — Is that the same as resegregating the American Armed Forces? That's a really appalling thing to say about somebody.

ALLEN: Well, well it's not, you know it's — wait a second. It's not that far of a cry for some people.

CARLSON: But has that suggestion ever come up? That's specifically, you wrote that

ALLEN: We're talking about the Attorney General of the United States.

CARLSON: No-no, we're talking about your column. You said —

CARLSON: You suggested that was even a possibility he would re-segregate the US Armed Forces. And I'm asking where did that come from?

ALLEN: I said he wouldn't.

ALLEN: But however, however —

CARLSON: You're attacking him, but not directly.

ALLEN: — lots of people of all sort of backgrounds in the United States Armed Services. First integrated by Harry Truman, way back when. All of those people, who are not white people, would have to have faith — and the reason that came up is we were talking about a potential Defense Secretary appointment for him at some point — should be able to have faith that their leader doesn't discriminate against them, or is not prejudiced against him.

But by the way, you know what else is a very diverse place? It's the state of Alabama, which he's represented for 20 years. It's 25% African-American. Can you name, in the 20 years he has served, 19 as Senator, a single instance where he has mistreated someone on the basis of his race? Ever? One?

CARLSON: You're calling the guy a racist, so why don't you —

ALLEN: Here, I'll give you an example of something I think should worry people if they believe in the equal protection of the law.

ALLEN: When he talks about immigration, right? He's a big anti-immigration guy, wants to crack down on immigration. When President Obama said he was going to put 2,000 minors, undocumented minors, in Alabama —

ALLEN: — in the State of Alabama, Jeff Sessions' response was, "We're going to have to treat them and feed them and let them go." So square that with —

CARLSON: Okay. So what, what, I'm missing your point. Was the state not on the hook for feeding and clothing those kids though?

ALLEN: He was complaining about the idea that he was, that the State of Alabama was going to have to feed and clothe children. Do you think that's such an awful —

CARLSON: Okay, but that makes him a racist? Is that your example of his racism? Are you being serious?

ALLEN: First of all, I don't think I called him racist.

CARLSON: You called him racist like nine times in the column (holds up a printout of the column, which appears to have racist contentions highlighted) ...

During the rest of the segment, Allen, among other things, claimed that Sessions' support for deporting illegal immigrants and traditional marriage are positions which are "beyond the ideological fringe."

There's not enough space to take apart every one of Allen's dishonest tactics in the portion of the interview presented, let alone the full eight-minute slugfest. Here are just five; readers can surely identify more:

Based on my review, Carlson was conservative in citing just nine instances where Allen alleged or implied that Sessions is a racist, even as Allen claimed, "I don't think I called him racist."

Allen is probably telling the bathroom mirror today that "I never used the word R-A-C-I-S-T. So I'm right."

Spare us, pal. Here are the specific examples:

2. Photo caption — "Jeff Sessions has learned to mask his contempt for racial, ethnic and sexual minorities."

3, 4, and 5, in Paragraph 2 — "called major civil rights organizations 'un-American,' used racially insensitive language with associates, and even said pot-smoking was the only reason he no longer thought the KKK was OK."

7. Paragraph 5 — "his ascent to the top civilian defense job would send a terrible message to people of color."

8. Paragraph 6 — "the Senate has a responsibility to prevent the federal government from becoming a haven for white nationalists and their friends."

9. Paragraph 6 — The Stormfront quote discussed in the video.

10. Paragraph 6 — "His confirmation would reinforce Trump’s appointment of white nationalist Steve Bannon to the top strategist’s role at the White House."

11. Paragraph 9 — "Over the years, Sessions has learned the lesson taught by his first confirmation — to mask his contempt for racial, ethnic and sexual minorities."

12. Paragraph 10 — "his opposition to bipartisan comprehensive immigration reform legislation is couched in concern for American citizens losing out on jobs to undocumented workers." But that opposition is based in racism. Jonathan Allen just knows it.

13. Paragraph 12 — If named Attorney General, "nonwhites would have good reason to fear that he would actively or passively defang the enforcement of federal civil rights laws."

14. Paragraph 14 — "... he’s exhibited little humanity when talking about children of undocumented immigrants." Allen brought up this passage in the interview when Carlson, who would not have included this in his list of nine instances, demanded an example of racism.

One might argue that the subheadline and photo caption cited first and second represent duplicates. I contend that they're really amplifiers, and absolutely should count. Even then, if excluded, that would still leave a dozen.

As noted earlier, Allen added another racism charge during the interview when he cited Sessions' being "opposed to the Voting Rights Act" as being in the same neighborhood as wanting to desegregate the military, which is just plain stupid.

The fact is that Sessions was opposed to the renewal of the Voting Rights Act decades after its original passage because of its continued federal interference in the handling of elections in certain areas, mostly in the South. In 2013, the Supreme Court agreed with Sessions and others holding that position, striking down the federal requirement for "'pre-clearance' from the U.S. attorney general or federal judges before making any changes to election or voting laws." There is no evidence that Sessions was or is opposed to any of the Act's other provisions.

We now know that Jonathan Allen is a de facto Democratic Party operative — which he actually was a for a brief period for Debbie Wasserman Schultz (/surprise), until he realized that he could be more effective carrying out his propaganda-peddling tasks as a "journalist" — thanks to Carlson's persistence and his refusal to let the reporter change the subject when cornered.