AP Pity Party: 'Obama Must Find a Way to Explain Trump' to Rest of the World

Lederman wrote that our poor, put-upon president "must pivot and reassure the U.S. and other countries that somehow, it will all be OK." It's almost as if he needs to provide "safe spaces" on Air Force One for grieving foreign snowflakes who are apparently having as hard a time accepting reality as many U.S. college students.

When was the last time a lame-duck president went on a foreign tour during his final weeks in office? My recall, covering the past three decades, is that it's never happened. If any of the last five (Bush 43, Bill Clinton, Bush 41, Reagan, Carter) had embarked on a significant multi-country foreign excursion, I believe it would have raised eyebrows over the motivations. If I'm wrong about the precedent, it's certainly a fact that no previous president has gone on the equivalent of a lame-duck apology tour, which is what's clearly happening here.

Lederman's coverage hints at the motivation, which longtime Obama watchers can easily predict: Obama's tour was intended to be an ego-feeding victory lap celebrating the idea that his aggressive campaigning on behalf of Hillary Clinton had saved the world from Donald Trump and the foreign policy abyss a Trump presidency supposedly would cause.

Instead, Obama is now going out to tell the world that the American people screwed up again (bolds are mine throughout this post):

On last foreign tour, Obama must find a way to explain Trump 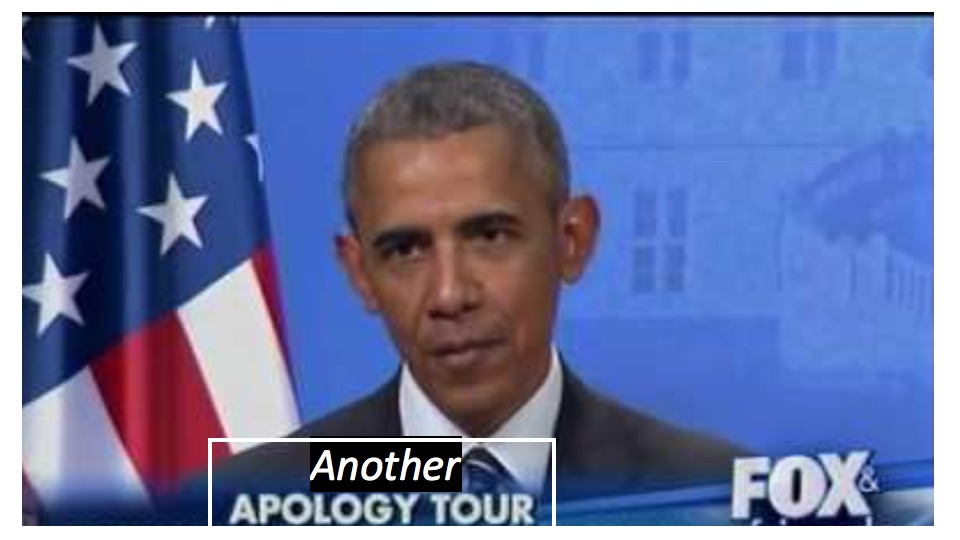 It was supposed to be his grand valedictory tour. Now President Barack Obama must use his last major trip abroad to try to calm shocked world leaders about the outcome of the U.S. election, and what comes next when Donald Trump is president.

Trump's unforeseen victory has triggered pangs of uncertainty at home and grave concerns around the world. Though Obama has urged unity and said the U.S. must root for Trump's success, his trip to Greece, Germany and Peru forces him to confront global concerns about the future of America's leadership.

"In some ways, there's nothing to say," said Heather Conley, a Europe scholar at the Washington-based Center for Strategic and International Studies.

Well, okay. Then why go?

Conley said Obama's trip, planned when it seemed certain Hillary Clinton would win, had been designed to reassure the world that the U.S. had regained its footing after a toxic campaign that unnerved foreign capitals. "Now the president has the unenviable task of telling his counterparts and explaining what Europeans are now coining 'the Trump effect,'" Conley said.

For months, Obama lent credence to those concerns as he urged Americans to reject Trump. Standing alongside Singapore's prime minister in August, Obama said Trump was "woefully unprepared" because he lacked "basic knowledge" about critical issues in Europe, Asia and the Mideast. And during a visit to Japan, Obama said he wasn't the only world leader worried about Trump.

"They're rattled by him, and for good reason," Obama said in May.

Here we are again at what I believe is another example of unprecedented behavior.

Not only was Obama the first U.S. President since World War II, if not far earlier, to actively campaign on behalf of the would-be successor from his own party (to review: Bush 43, Bill Clinton, Bush 41, Reagan, Carter, LBJ, Eisenhower and Truman didn't do this). He also turned visits to at least one foreign country (and probably others) during the past few months into de facto campaign stops. If a Republican or conservative president ever did this on behalf of their potential successor, the denunciations for boorish and inappropriate behavior from the press and the left (but I repeat myself) would have been deafening.

Here's the final AP excerpt in this post, which includes why I made my "safe spaces" remark at the beginning of this post, as well as a reference someone from the recent past who should have been jettisoned from the government months ago:

Now, Obama must pivot and reassure the U.S. and other countries that somehow, it will all be OK.

Ben Rhodes, Obama's deputy national security adviser, said the president fully expects Trump's election to be a dominant theme of the trip, but would emphasize his plans to keep carrying out his approach until Trump takes over. He said Obama would argue that basic U.S. principles like honoring treaty commitments have historically survived even the most dramatic changes of administrations.

Ben Rhodes, readers should recall, is the guy who crowed about how was able to manipulate the ignorance of the press to reduce resistance to the Iran nuclear "deal." Specifically:

... (Rhodes) led journalists to believe a misleading timeline of U.S. negotiations with Iran over a nuclear agreement and relied on inexperienced reporters to create an "echo chamber" that helped sway public opinion to seal the deal.

... (he) helped promote a “narrative” that the administration started negotiations with Iran after the supposedly moderate Hassan Rouhani was elected president in (August of) 2013. In fact, the administration’s negotiations actually began earlier, with the country’s powerful Islamic faction, and the framework for an agreement was hammered out before Rouhani’s election.

The Associated Press assisted in promoting that "narrative."

The AP's Julie Pace revealed in November of 2013 that the wire service had known about secret U.S.-Iran negotiations for eight months, i.e., well before Rouhani took office, but did not report them. A day later, making a mockery of the wire service's attempted denial, a reporter at another news organization disclosed that the Obama administration had asked it and AP to keep not report on the existence of those negotiations. That organization and the Obama-worshipping AP complied.

The end result of all of this was best summed up by, of all people, Hillary Clinton campaign manager John Podesta. In a July 2015 email exposed by WikiLeaks, Podesta responded "Yep," thereby agreeing with a correspondent who quoted Illinois Senator Mark Kirk when he said that the Iran "deal" is "the greatest appeasement since Chamberlain gave Czechoslovakia to Hitler." (Given that the "deal" involves nuclear weapons, what Kirk said is arguably an understatement.)

Despite all of this (or is it because of all of this?), the AP's Lederman treated Ben Rhodes, the guy who reveled in his deceptive "narrative," as just another routinely quoteworthy Obama apparatchik lecturing us about how the Trump administration should be expected to honor "treaty commitments," obviously (given who's saying it) including the Iran "deal," which isn't even a Senate-ratified treaty. Excuse me while I get sick.

Lederman and AP really need to ask how Obama, whose policies have made the world a far more dangerous place than it was eight years ago (just a few obvious examples: Libya, Syria, destructive Middle Eastern migration to Europe, Russia's ascension, China's increased belligerence, the precedent of paying outrageous ransoms to free hostages), can justify what he has done when he meets with foreign leaders. They also need to ask how those foreign leaders, if they are still somehow sympathetic with what Obama has done, can credibly explain themselves to their citizens.

These questions will never be asked, because the Associated Press and its reporters, as shown earlier, have effectively served as Obama administration accomplices for years.