Media "fact-checkers" have finally arrived to the point where unpleasant facts stated by people they consider unpleasant can simply be labeled "misleading," and dismissed without anything resembling a coherent explanation.

Apparently Kurtis Lee and Seema Mehta at the Los Angeles Times have access to a special Newspeak news media version of the dictionary which contains a definition of "misleading" differing from the real dictionary: "deceptive; tending to mislead" ("mislead" as a verb primarily means "to lead or guide wrongly; lead astray"). They're using their Newspeak definition to claim that a completely factual statement by Republican vice presidential nominee Mike Pence about U.S. plans to accept Syrian refugees, which they label an "accusation" in their headline, is, well, "misleading."

Lee and Mehta didn't even try to explain why what Pence said is "deceptive," because they can't (HT longtime commenter Gary Hall; bolds are mine): 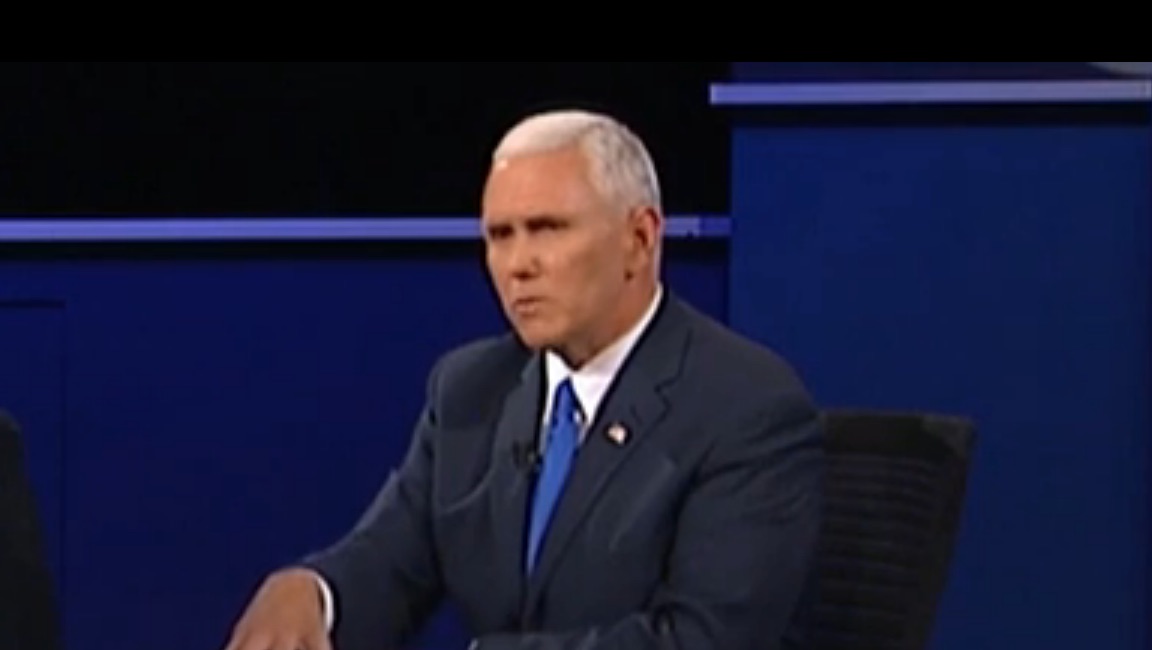 Mike Pence, asked during the vice presidential debate how he would deal with home-grown terrorists, quickly turned to a frequent talking point of his running mate: Donald Trump often says that Hillary Clinton supports a radical 550% increase in Syrian refugees.

Clinton’s running mate Tim Kaine pushed back by noting that on Monday, a federal appeals court upheld a lower court’s order blocking a Pence effort to try to stop Syrian refugees from being resettled in his home sate of Indiana.

While the figure Pence cited is accurate, the assertion is misleading, given the scale of the crisis with Syrians fleeing the country’s bloody civil war that has raged since 2011.

In a September 2015 CBS News interview, Clinton said she believes the U.S. should take in 65,000 Syrian refugees, which would be a 550% increase from the Obama administration’s goal of resettling 10,000 refugees this fiscal year.

The reporters' Newspeak definition of "accusation" in the headline is apparently "a fact stated by someone we don't like directed at someone we do like that puts the person we do like in a bad light."

There is a second genuine definition of "misleading" which the reporters appear to be trying to fall back on — "to lead into error of conduct, thought, or judgment." They did not identify what "error" Pence, who at the moment is the governor of one state and has no national power, is trying to cause. That means the reader is on his or her own to try to determine the pair's thought process — or if there even is one.

In their fevered minds, Lee and Mehta may believe that Pence's statement of a fact (again, not an "accusation") is going to cause the American people to be resistant to doing their "fair share" to take in refugees — and that would be an "error." But instead of saying so, the pair just lazily accused Pence of being "misleading" — which, absent anything resembling direct identification of the "error" which might be involved, limits that word's meaning to "deceptive."

If the reader tries real hard, he or she can pull an implication out of the LA Times writeup that the U.S. should be doing even more than President Obama is trying to do from the following paragraphs:

(the 65,000 referenced above is) a small fraction of the nearly 11 million Syrians who have left their homes, with many settling in nearby countries. About 470,000 have been killed in the war.

Human rights groups have called for the U.S. to accept higher numbers, as smaller countries have admitted far more refugees. Turkey, which neighbors Syria, has taken in 2.5 million refugees, and hundreds of thousands have fled to Germany, according to Amnesty International.

... The Obama administration indicated this month that it would raise its goal of admitted refugees to 110,000 — with a substantial number being displaced Syrians — for the fiscal year beginning Oct.1.

Clinton has remained steadfast in her calls to admit 65,000 refugees and has not indicated support for the new proposal from the White House.

But according to "human rights groups," Obama's 110,000 is nowhere near America's "fair share" number of refugees to accept:

Some are calling on Obama to admit at least 200,000 refugees from around the world, including tens of thousands of Syrians, through the U.S. refugee resettlement program and other routes. That's effectively twice as many total refugees as the Obama administration has planned to accept in the fiscal year that starts Oct. 1.

Intrepid reporters Lee and Mehta were at the ready with the smear labels for Pence, but they failed to tell their readers that "human rights groups" really want a massive increase in the refugee flow into America well above what the Obama administration is pursuing (note that "at least" specifies a minimum, with no potential identified maximum) — never mind that it "is insulting our intelligence by claiming that it can adequately and appropriately 'vet'" even "10,000 or more Syrian refugees." In the age of terror attacks, are we really expected to be so nonchalant about admitting so many people about whom we know so little‚ to the point where even when they leave a social media trail, the U.S. government doesn't check it?

So here's what this means, in our best guess at the Orwellian "logic" of Kurtis Lee and Seema Mehta — because, again, they didn't explain themselves:

Is it any wonder, given the utter incoherence dissected here, that U.S. news consumers are tuning out the establishment press?