The conservative argument that our inaccurately named “mainstream media” are incurably liberal and biased has been dismissed by the media for decades as a shady tactic, as a way of “working the referees” to gain some kind of media advantage. This is a terrible analogy, because no sports fan would ever accept referees as tilted as these people.

Exposing liberal bias is a conservative tactic – to persuade the public to be skeptical of the media elites and their claims to be “mainstream.” In more idealistic moments, these exposures are made in the hopes the media would respond by attempting to be fairer, more balanced, or more objective and accurate. You would hope, for example, for items like the belated and reluctant acknowledgement from “prestige media” outlets like CBS, The New York Times, and The Washington Post that the Hunter Biden laptop was an authentic cache of documents and photographs, and not a Russian disinformation conspiracy. 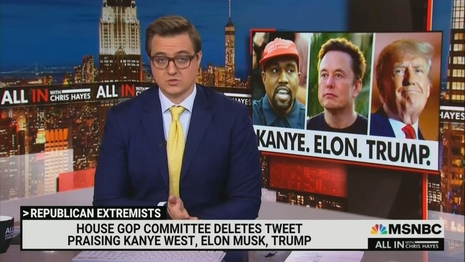 Like almost everyone else in the leftist bubble, MSNBC host Chris Hayes has not been engaging in the “Twitter Files” revelations about how, in October 2020, Twitter squashed all references to the New York Post scoops about Hunter’s left-behind laptop. But on Twitter, he argued this is just another conservative schtick.

Hayes announced, “What’s become really clear in the last few weeks is that all the ‘Big Tech’ anger from the right is really just the latest iteration of the ‘liberal media’ critique that stretches back to Goldwater, and indeed New-Deal-Era right-wingers.”

He added: “There’s no new analysis or structural insight. It’s just ‘the media is run by libs!’ Story old as time.” Hayes allies tweeted along, that this is more “ref-working” and conservatives trying to “jerry-rig” Big Tech to their advantage.

The real bone to pick with Hayes is that there is no new “structural insight.” Hayes, who poses on television as a brainiac, can’t seem to distinguish between “news” media and social media. In “news” media, liberal outlets often brutalize conservatives and offer their targets little or no rebuttal. In social media, Big Tech has offered conservatives a forum for constant rebuttal, but after being torched by the Left for allowing “misinformation” (like the Hunter laptop), they ham-handedly squash the rebuttal.

In both cases, Hayes is attempting to deny that liberal bias exists, that the conservative tactic is a sham. It’s deeply silly, since anyone watching MSNBC for an hour isn’t going to discover an oasis of objectivity.

The similarity between the two arguments here is that since the Trump campaign kicked off in 2015, social media transformed from benign Obama magnifier to malignant Trump enabler in the eyes of journalists. These sites suddenly needed to aggressively “curate” and “moderate” content just as the “news” media do. The conservative critique is that the Left always expects narrative enforcement and information dominance. They are “truth” and “facts,” and anyone who opposes them is misinforming the public.

Hence Elon Musk became a villain by buying Twitter and promising to provide a “free speech” template – content-moderating, yes, but not journalism-crushing. Pundits like Chris Hayes hate him because they can’t stand to be accused of being against “free speech.” In reality, the “news” media think the First Amendment is only about their speech, and anyone who criticizes them should be ignored, or if necessary, censored as a public threat.

Outrage from the Right is concentrated on media elites that always paint themselves as the most trustworthy and reliable sources when they behave in the shabbiest partisan manner. Some things never seem to change….because they never want to change.