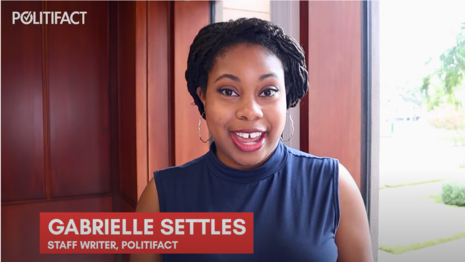 This is how tilted PolitiFact is: there was no "fact check" on Al Gore going on national TV and saying "climate deniers" are like the police in Uvalde that let children be murdered, but former Rep. Doug Collins drew a "False" for saying on Fox Business that Reps. Alexandria Ocasio-Cortez and Ilhan Omar attracted attention themselves by getting "basically, fake arrests" on Capitol Hill to protest abortion.

PolitiFact's Gabrielle Settles posted a nit-picking "Truth-O-Meter Minute" video to their YouTube account on Thursday, giving Collins a ticket for mocking this publicity stunt. This is the Collins clip she singled out on Mornings with Maria Bartiromo on July 20:

COLLINS: AOC and the Squad are best at one thing, self-promotion. That's all this was about. I guess the attention wasn't on them enough lately, so they decided to go out and get basically, fake arrests and make sure their photos, mug shots looked good.

But the dictionary definition of "arrest" is "seize (someone) by legal authority and take into custody."

U.S. Rep. Alexandria Ocasio-Cortez was arrested during an abortion-rights demonstration outside the Supreme Court. She didn’t fake the arrest. https://t.co/sp8Sx6NRvc

Settles announced the Capitol Police “told us none of the protesters at the rally were put in handcuffs because the arrests were non-custodial. That means the defendant can walk away from the scene, but that they’re given a ticket for their infraction, which is what happened to AOC. She later posted a video to her Instagram Story showing her ticket, which had a fine of 50 dollars.”

Thus, you should be able to say it's a "basically fake arrest" designed for self-promotion. A routine traffic stop for a speeding ticket is not an "arrest." This is on the same level as saying Settles shouldn’t make a “Truth-O-Meter Minute” video that lasts 2 minutes and 22 seconds. 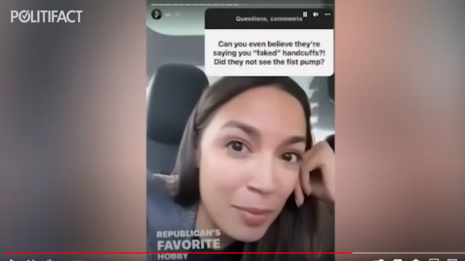 Settles supportively aired AOC video and quoted from AOC's July 20 tweet, insisting there was "No faking here. Putting your hands behind your back is a best practice while detained, handcuffed or not, to avoid escalating charges like resisting arrest."

This video was working from a Bill McCarthy fact check to police Instagram claims of a "fake arrest." PolitiFact could have just as easily fact-checked AOC for claiming “This was an activist-led civil disobedience” requested by left-wingers at CPD Action and “That is very different than a ‘publicity stunt’ led by members themselves for a headline.”

It was a publicity stunt. She faked being handcuffed. But PolitiFact is still defending the Democrat.

Liberals at @PolitiFact actually threw a "False" flag at ex-Rep. Doug Collins for saying to Maria Bartiromo that AOC & Omar got "basically, fake arrests" in an abortion protest. NO "False" for those two radical leftists for pretending to be handcuffed! pic.twitter.com/wE1aCkJ2LB