When the Supreme Court overturned Roe vs. Wade, there was a shocking (if temporary) turn in the news coverage. The pro-life victory was so historic that journalists actually interviewed pro-life activists to get their reaction to this glorious news.

It was different when some scabrous leaker gave Politico a copy of Justice Alito’s draft opinion. In the week after the leak, abortion advocates overwhelmed abortion opponents on ABC, CBS, and NBC by a 153 to 57 count.

On July 8, when President Biden prepared to issue an executive order on “abortion access,” the pro-life view was almost non-existent. None of the network morning shows aired any soundbites from the opposing camps, but the focus was all on the abortion lobby, laying the euphemisms on thick. 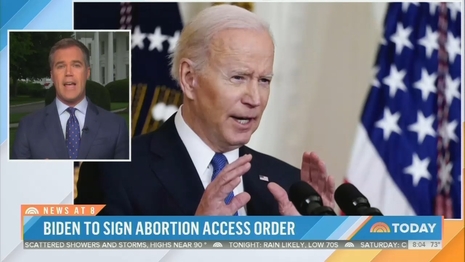 NBC’s Peter Alexander previewed that Biden would attempt to “protect access to abortion” and expand access to “abortion medication” that’s “safe and effective,” as Biden seeks to “ensure the safety of patients and providers.”

In this euphemistic “news” vocabulary, you can sense the callous disregard that liberals have for the unborn babies, who are never the ones who deserve “access” to life. They are undeserving of “safety.” The humanity of the unborn isn’t even considered in most TV “news” stories.

On Friday evening, the network newscasts provided nine soundbites, and all nine were abortion supporters. ABC at least threw in a sentence at the end from Rachel Scott: “Tonight, anti-abortion rights groups say that the president’s executive actions today are a tragic overreach.”

The only soundbite on NBC was President Biden denouncing “extremists” in the Republican Party. The networks can never locate an “extremist” in favor of abortion. In fact, they didn’t use words like “liberal” or “leftist” to describe abortion advocates.

An aside: With all the usual comedy, NPR’s All Things Considered on Friday night only had one viewpoint: Rutgers law professor Kim Mutcherson, and she was outraged at Biden. His order was “as milquetoast as you can be,” it changes "absolutely nothing,” and the president must declare a “public health emergency” now that babies can’t be killed.

On Saturday morning, ABC and NBC offered brief updates, and only CBS offered any soundbites. All six soundbites were either Biden or Jen Klein, who heads his “Gender Policy Council.” So that’s 15 to zero in that news cycle.

Some might expect a more fair and balanced treatment when the national newspapers reported on this executive order...and they would be wrong.

Take the front-page article in Saturday’s Washington Post, under the headline “With limited tools, Biden acts on abortion access.” The quote count was 15 to 2 – and both pro-life quotes were one person, Denise Harle of the Alliance Defense Fund.

Saturday’s New York Times placed its story inside on A-17. The Times put a dangerous “far-right” Christian fringe on the front page, then spilled that story onto A-16, or across from the Biden abortion-order story. The quote count was 7 to 1.

USA Today doesn’t publish on Saturdays, but it made Monday’s front page, under the headline “Abortion-access advocates urge action.” The quote count favored the abortion superfans 6 to 1. Add those three stories up, and the quote count is 28 to 4.

If you read through these stories, the imbalance is more dramatic, focused heavily on complaints against Biden from the left. We could joke that this episode shows “fair and balanced” reporting – if the two sides are the Biden White House and the outraged pro-abortion extremists.