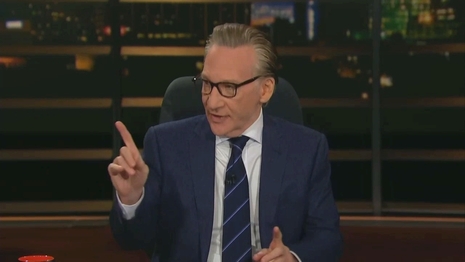 On Friday's Real Time with Bill Maher, the HBO host agreed with Kellyanne Conway that the attempted murder this week of Supreme Court Justice Brett Kavanaugh was proof of media bias.

The New York Times buried that story on page A20. "If this has been a liberal Supreme Court justice that someone came to kill, it would've been on the front page," but "if it's not part of something that feeds our narrative, f--k it, we bury it."

MAHER: Okay, and they stopped him. Okay? But he was, he's from California, Chuck Schumer said some very inflammatory words, the kind of thing that people on the right to say and there's a horrible shooting and they blame it -- it is rather comparable. And Chuck Schumer did walk it back, nobody on the right ever does that -- he did. I saw this. He did. He said 'we're from Brooklyn, we speak too strongly.' He said something about how -- they were talking about, this guy was upset that Brett Kavanaugh is going to overturn Roe vs. Wade. Okay? And, interesting he was upset that he wasn't doing enough to gun control and shows up with guns to kill him. So again, cuckoo people do cuckoo things. Okay. The point is -- I think your point and the point I would agree with is The New York Times buried this this.

JOSH BARRO: Yeah, it was a tiny thing below the fold.

MAHER: If this had been a liberal Supreme Court justice that someone came to kill, it would've been on the front page. [Applause] And that's what so disappointing about a paper like The New York Times. Because they wear their bias on their sleeves and if it's not part of something that feeds our narrative, fuck it, we bury it.

The Times offered a second story on Friday about the House debating a bill already passed by the Senate to offer more protection for Supreme Court justices. That was published on page A-23.