Rep. Elise Stefanik (R-N.Y.), the No. 3 House Republican, and other GOP lawmakers came under scrutiny Sunday for previously echoing the racist “great replacement” theory that apparently inspired an 18-year-old who allegedly killed 10 people while targeting Black people at a supermarket in Buffalo.

The baseless conspiracy theory claims that politicians are attempting to wipe out White Americans and their influence by replacing them with non-White immigrants....

While Stefanik has not pushed the theory by name, she and other conservatives have echoed the tenets of the far-right ideology as part of anti-immigrant rhetoric that has fired up the Republican base ahead of the midterm elections.

This reporter also raised eyebrows in February for a report on Justice Clarence Thomas that identified him as "the Black justice whose rulings often resemble the thinking of White conservatives." (After complaints, the Post actually edited that out.)

Sotomayor suggested Stefanik was as controversial as Tucker Carlson, who liberals want fired from Fox News. She cited Facebook ads the congresswoman ran: 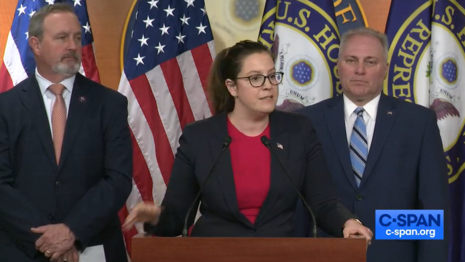 “Radical Democrats are planning their most aggressive move yet: a PERMANENT ELECTION INSURRECTION,” reads one of the ads, which shows a reflection of migrants in sunglasses Biden is wearing. “Their plan to grant amnesty to 11 MILLION illegal immigrants will overthrow our current electorate and create a permanent liberal majority in Washington.”

It’s a similar argument frequently espoused by Fox News host Tucker Carlson, leading the Anti-Defamation League to repeatedly call for his firing since April 2021 after he appeared to endorse the concept during one of his segments.

"Overthrow our electorate" is pretty hot talk, but it's quite similar to media outlets who heavily imply this somehow leads to "Stefanik echoed racist mass shooter."

At least the Post let Stefanik's camp engage in some media criticism:

Stefanik’s senior adviser Alex deGrasse said, “Any implication or attempt to blame the heinous shooting in Buffalo on the Congresswoman is a new disgusting low for the Left, their Never Trump allies, and the sycophant stenographers in the media."

Sotomayor also mentioned an unnamed Stefanik spokesman explained the ads came "when New York City was debating whether to allow roughly 1 million non-residents the chance to vote only in local elections. City council approved the measure in December, allowing those living in NYC for over 30 days with a work permit — not undocumented immigrants — to partake."

So is that a "baseless conspiracy theory," that Democrats eagerly want illegal immigrants to vote? You get smeared with murderous racists when you object.

It's all in a day's work at a Democrat rag. Their blogger Greg Sargent also got into the act with "How Elise Stefanik and the GOP sanitize ‘great replacement’ ugliness."

This is the same partisan newspaper that publishes gushy puff pieces about race-baiting radical Squad congresswomen, from Ilhan Omar to Cori Bush.