In the Midst of a WashPost Puff Piece on Ilhan Omar, A Disturbing Trend Emerges 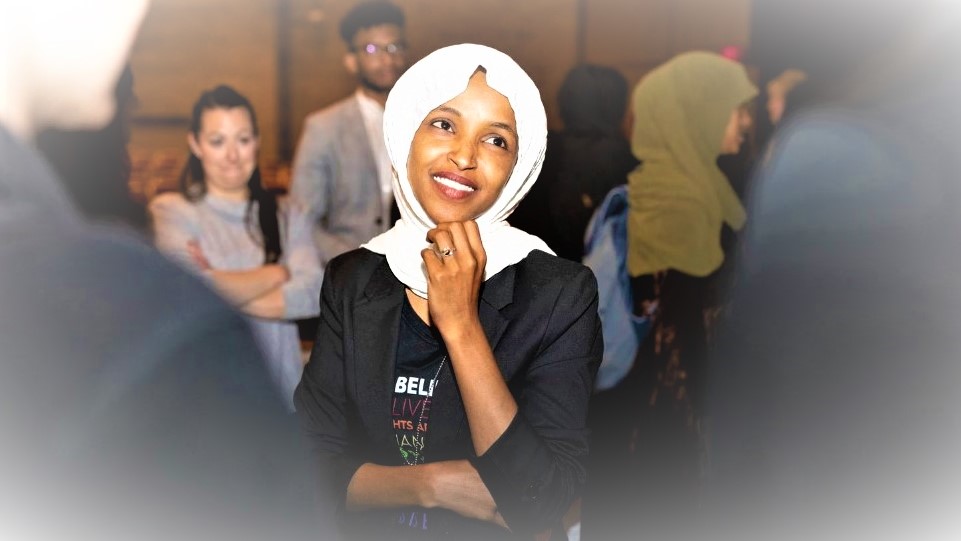 Two Sundays ago, The Washington Post's front page mourned how two slaughtered Scandinavian women were a "weapon for the far right." On July 7, the Post front page frets for over 3,500 words on "The complicated American story of Ilhan Omar: The congresswoman's refugee narrative was made for the rancor and racial division of the Trump era."

But once again, the exploiters of racial rancor are "conservative blogs" poking around in Omar's weird marital and political history, not the divisive liberal newspapers who side with the "marginalized" over the right-wingers.

You can smell it in the way Greg Jaffe and Souad Mekhennet proclaim Omar's ascent raises "something bigger -- a battle over the American story -- who was entitled to tell it and how it would be told."

In the midst of hailing her on her terms as "America's hope and the president's worst nightmare," the Post runs through the scandalous history -- the "all about the Benjamins" tweet about Israel, the "somebody did something" sneer about 9/11 at a CAIR fundraiser, and her writing a letter urging leniency for nine Somalis convicted of trying to travel to Syria to join the Islamic State. (That was "an easy opportunity for her enemies to paint her as un-American.")

At least the Post duo noted she's not careful with the facts when she's running down American racism and injustice:

Five years earlier, Omar told the students, she was working for a Minneapolis city councilman who asked her to report back on problems with the courts. There, she recalled encountering a "sweet, old . . . African American lady" who had been arrested for stealing a $2 loaf of bread to feed her "starving 5-year-old granddaughter."

After spending the weekend in jail, the woman was led into the courtroom and fined $80 - a penalty she couldn't pay. "I couldn't control my emotions," Omar continued, "because I couldn't understand how a roomful of educated adults could do something so unjust."

"Bulls---!" she recalled yelling in the courtroom.

Laughter rippled through the auditorium, then silence.

Omar's story echoed the plot of Les Miserables. If true, it is also probably embellished. City officials said that police aren't allowed to arrest people for shoplifting unless there's a likelihood of violence or further crime. Typically, shoplifters are sentenced to attend a three-hour class.

In an interview, Omar said she may have flubbed some facts. "She might have had a prior [arrest]," Omar said. "I'm not sure. . . . The details might not have all matched, but that's what I remember."

Then the Post alllowed Omar to recall how she was bullied in school -- might that also be embellished, considering the last anecdote?

The family spent one year in the Washington suburbs, where Omar told a reporter for the New York Times that she was bullied by middle school students who stuck gum in her scarf, jumped her in the locker room and knocked her down the stairs. "They are doing this to you because they feel threatened in some way by your existence," she said her father told her.

Later, the Post reporters note another fact-mangling episode: "Recently, she told a group of veterans that about 45 percent of military families rely on food stamps. She was trying to make the point that Republicans didn't care for the troops. The actual number is less than 5 percent, according to Pentagon statistics."

Maybe the Washington Post "fact checkers" can start counting how many facts Omar mangles, like they do for the president....except the Post wants to be the president's nightmare.

PS: Scott Johnson at the Minnesota-based blog Power Line -- which has deeply analyzed the Omar record, especially the "curious case" of her marriages -- was appalled at how the Post "disposes of it in two sentences with a statement of facts that is highly dubious, to say the least, an implied chronology that is mistaken, and an avoidance of wrinkles in the story: 'Conservative blogs dug into her complicated marital history. She and the father of her three children split temporarily in the 2000s but still filed joint tax returns in 2014 and 2015, when Omar was legally married to someone else.'”

The Post represents the best that American journalism has to offer. With unlimited resources, gifted reporters, and talented editors, the Post demonstrates no interest in a most interesting story that has yet to play itself out and that may represent a problem Omar can’t talk her way out of. She has in any event so far essentially refused to try. Even the Star Tribune got to the story last month — a few years late, but nevertheless in a serious journalistic effort. The Post won’t even acknowledge the existence of the rock, let alone turn it over. How utterly pathetic.