On Wednesday, the splashy profile on the front of the Washington Post "Style" section was a sugary profile of the latest socialist radical to win a seat in the House of Representatives, Cori Bush of Missouri. The headline in the paper was puffy:

Marching right into the House

Jada Yuan, who a year ago was throwing sugar at celebrity leftist Valerie Plame for Congress (she lost the primary to a Latina), began. 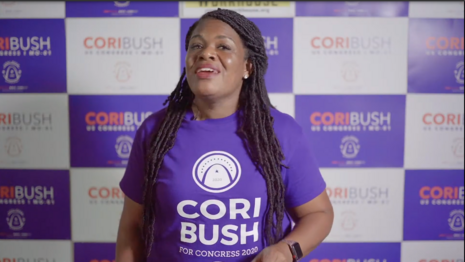 Cori Bush was missing her bullhorn. Sometime in August, someone broke into her SUV, ransacked the car and stole it — and nothing else.

That’s the kind of not-so-subtle message of intimidation that the activist turned congresswoman-elect has gotten used to over six years of being a leading Black Lives Matter organizer in and around Ferguson, Mo., where the movement began.

So the crimes happen to Bush, and no crimes come from Black Lives Matter protests. There's nothing here on rioting in Ferguson that destroyed businesses. That, um, distracts from the narrative.

Instead, the Squad gets to welcome her radicalism -- oops, make that "lived experiences" -- into Congress:

On Jan. 3, she will be sworn in at the Capitol — not just as the first Black woman to represent Missouri in her state’s 200-year history, but also as the first day-in-and-day-out BLM protester to earn a seat in those hallowed halls. Last week, she was appointed to the powerful House Judiciary Committee, which she had been lobbying for ever since winning her primary.

What she brings, in this era of generational clashes in the Democratic Party, is a wealth of lived experiences that many of her colleagues lack. She will be one of the few people in that legislative body filled with millionaires who, as Rep. Ayanna Pressley (D-Mass.) said, “understands deeply the scale and scope of the hurt that so many are experiencing right now.”

Nobody who's critical of Cori is getting into this article, just leftist colleagues:

She understands that justice is not synonymous with law enforcement; she said she was “stomped” and “kicked like a rag doll” one night in 2014 by six to eight police officers while trying to help a woman who appeared to be having a heart attack.

“Cori is not a person who is seeking out leadership because of the title,” said [Rashida] Tlaib. “She is someone that sought it out because she was tired and exhausted, as she would say, of watching people do nothing to help those that are hurting the most.”

There's only one suggestion that maybe Cori's going to make trouble for the Democrats:

As part of her party’s left flank, she’ll find herself in an intramural fight over such ideas as “defund the police” and “Medicare-for-all” — activist slogans that Democratic leaders worry contributed to the party’s down-ballot losses in the November election.

To get any sense of how radical Cori Bush's agenda is -- right in concert with Tlaib and Pressley, AOC and Ilhan Omar -- you have to get past the Post puffery and see The Federalist.