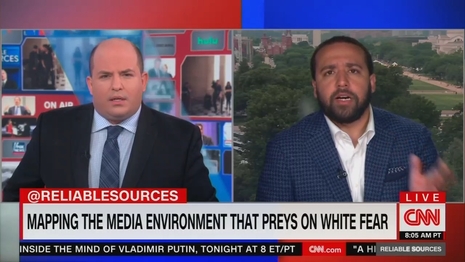 Bill Maher attacked the notion that the federal government would run an effort against "disinformation" broadly defined. When a racist teen shot up a Buffalo supermarket, disinformation broke out as liberal outlets raced to connect it somehow to Tucker Carlson and Fox News.

The New York Times and The Washington Post admitted they couldn't prove the Buffalo shooter had even watched or enjoyed Tucker's show, but they aggressively smeared the ten deaths on him anyway. "Measuring the extent of Mr. Carlson’s influence in spreading replacement theory may be impossible," admitted the Times. "But controversies around the host’s use of 'replacement' rhetoric appear to have at least helped drive public curiosity about the idea.

On the reliably liberal Reliable Sources, CNN host Brian Stelter brought on black journalist Wesley Lowery -- whose book on race was titled They Can't Kill Us All -- to insist that Tucker and Laura Ingraham often sounded like white supremacists, and tossed in Ben Shapiro and Andrew Sullivan for spice. Stelter suggested other conservatives were also responsible, but they can't help but suggest Fox is well, an Enemy of the People, at least the non-white people.

This anger at "replacement theory" energetically ignored that liberals have been delighting in the notion of a more multi-racial America for decades. The cover story in the April 9, 1990 edition of Time magazine happily projected that "in the 21st century -- and that's not far off -- racial and ethnic groups in the U.S. will outnumber whites for the first time. The 'browning of America' will alter everything in society."