The online headline was "Supremacy movements unite over abortion restriction, though for different reasons." Anchor Adrian Florido began: "Overturning Roe v. Wade has long been thought of as the work of Christian conservatives, but other non-religious movements on the far right have also played an important part, and aspects of their extreme ideologies have found their way into the mainstream."

They bizarrely call their show All Things Considered as they turn for expertise to two far-left "experts" on pro-life advocates. There's no dissent considered. 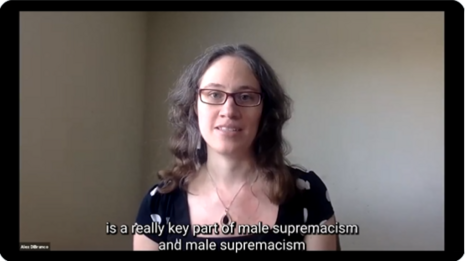 YOUSEF: I spoke with Alex DiBranco, who runs something called the Institute for Research on Male Supremacism. And she says we have to stop thinking about extremism in the anti-abortion context simply as violence. Instead, she says, we should be looking at the ideologies and movements that inspire that violence because they've pulled America's abortion debate to the extreme right. And you can hear that in the language used today.

And anything that talks about criminalizing or banning abortion or contraception inherently -- that is supremacist. It's extremist. And it's important that we don't fall into their own self-framing around that.

NPR won't let conservatives have any "self-framing." They are shut out. Yousef's other expert turned to the white-supremacist pro-lifers:

YOUSEF: The Christian anti-abortion wing historically has framed their campaign as multiracial, multi-ethnic. But white power activists frame the issue differently. Here's Carol Mason. She's a professor at the University of Kentucky.

CAROL MASON: There's a far-right idea of demographic decline or of the great replacement in which Christian civilization or white people are being outnumbered by non-Christian and nonwhite people. And this is a fear that has been bubbling up in anti-abortion materials for a long time.

Yousef concluded by noting "Mason doesn't say all anti-abortionists are extremists or that they're all extremists or white supremacists, but she says that anti-abortion messaging has tended to accommodate white nationalism and conspiratorial thinking, most recently including QAnon and its claims about elites dismembering babies, you know, imagery kind of similar to what anti-abortion activists have used of aborted fetuses."

DiBranco and Mason are quite closely aligned on this "male supremacism" theory. They have both authored chapters in a forthcoming book titled Male Supremacism in the United States: From Patriarchal Traditionalism to Misogynist Incels and the Alt-Right. They're also both aligned with Political Research Associates, a far-left research group. Here's DiBranco in a PRA webinar.

Reproductive control, in the form of anti-abortion laws or coerced sterilization, are a product of male supremacism says @AlexDiBranco in this #WebinarWednesday clip during our webinar on male supremacism & its role in authoritarianism. Watch here: https://t.co/jcOZxNwMbD pic.twitter.com/eIOCay3chy

NPR is brought to you....by you, through your taxes.