One Side Considered: NPR Airs Free Ad for Transgender Advocate at Biden's HHS

The most ridiculous joke that airs daily on National Public Radio is that their evening news program is called All Things Considered.

On the Friday night commute, NPR listeners witnessed an audio press release of sorts for the Biden administration. Transgender activist and assistant HHS secretary Rachel Levine is giving a speech to an LGBTQ health conference at Texas Christian University, and NPR promoted it like a press secretary. No opposing view was considered, certainly not about the "Christian" part. 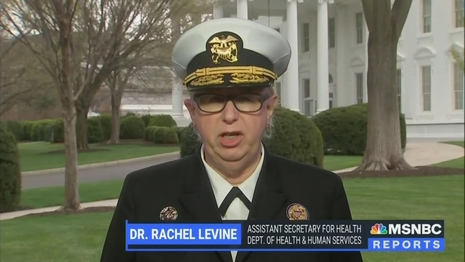 MARY LOUISE KELLY, anchor: Admiral Rachel Levine, the highest-ranking transgender official in U.S. history, will give a speech in Texas tomorrow. Levine is the U.S. assistant secretary for health. She'll be speaking at Texas Christian University in Fort Worth, where she will urge medical students to fight political attacks against trans young people and their families. NPR's Selena Simmons-Duffin got an exclusive look at the prepared remarks and sat down with Levine before she flew to Texas.

SELENA SIMMONS-DUFFIN: All over the country, from Idaho to Arizona, lawmakers are introducing bills that target trans kids. They limit their access to health care or sports or what can be talked about at school.

RACHEL LEVINE: I'm not a political person, right? I'm a physician, and my focus is on medicine and public health.

Not a political person? But she's campaigning against "anti-trans" bills from coast to coast?

SIMMONS-DUFFIN: She writes, quote, "the language of medicine and science is being used to drive people to suicide. The mantle of concern for children is being claimed to destroy children's lives. We have to take a firmer stand on behalf of those who are being hurt."

SIMMONS-DUFFIN: Texas is a pointed setting for this speech. The state has investigated the parents of trans kids. Families have moved out of the state because they felt unsafe and the state attorney general recently attacked Levine herself on Twitter.

LEVINE: I take my feelings about that, and I put it into my advocacy and our policy work.

What did Attorney General Ken Paxton say in his "attack"?

Rachel Levine is a man. pic.twitter.com/OWgpKUmfHz

Imagine if he called her "Richard"!

This tweet can't be considered or quoted. The anti-debate stance of NPR is underlined when they let Levine says "there is NO ARGUMENT" against LGBT ideology, even when people start amputating body parts. NPR has no space for that "hate speech." 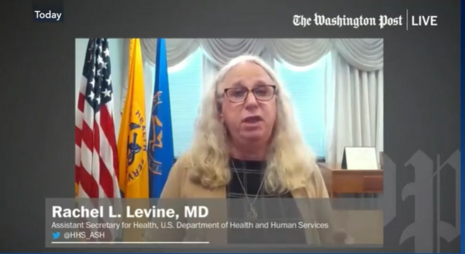 SIMMONS-DUFFIN: But importantly, she says, there is no scientific debate when it comes to the big picture.

SIMMONS-DUFFIN: Gender-affirming care is not harmful. It's lifesaving, she explains. And it's based on decades of research. I asked Levine if it's exhausting explaining her own experiences and answering questions about gender all the time.

LEVINE: It's fine. It doesn't bother me. You know, I've been in these positions for seven, eight years now, and so it doesn't surprise me.

SIMMONS-DUFFIN: She understands that as part of her role, to use her position and her visibility as an open and proud transgender woman, she says, to support vulnerable communities in all ways that she can. Selena Simmons-Duffin, NPR News.

Conservatives are forced to fund this one-sided propaganda. They are not considered.