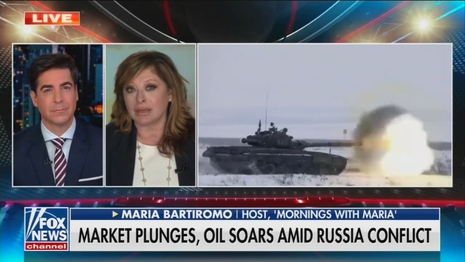 In the latest of their fatuous “fact checks” that rate something “Mostly False” as they acknowledge it’s actually true, PolitiFact took after Fox News host Maria Bartiromo for saying this to fellow Fox host Jesse Watters on his Primetime show on February 22: “We have doubled our (oil) imports from Russia in the last year.”

PolitiFact then ran this headline underneath its February 28 item:

The U.S. did not double oil imports from Russia in the last year

But in their “If Your Time Is Short” summary, they noted she was right on crude oil:

Here's some video of the Bartiromo argument:

BARTIROMO: By the way, the United States is also reliant on Russian oil. We have doubled our imports from Russia in the last year. No question why President Biden is begging OPEC and others to pump more oil.

In just his fifth article for the website, PolitiFact newbie Yacob Reyes was trying to somehow conflate oil imports with refined petroleum:

This increase resulted in Russia edging out Mexico to become the second-largest foreign oil supplier to the U.S. in 2021, behind only Canada — which accounts for almost half of U.S. oil imports.

Historically, this is a notable increase — about 28% — but it is far from double.

When we asked the Fox Business Network about Bartiromo’s remarks, a spokesperson pointed to the growth in crude oil imports alone.

On the same home page, PolitiFact was awarding a "Mostly True" rating to Joe Biden for saying “Millions of hardworking Americans will no longer have to worry about unexpected medical bills.”

.@PolitiFact & @yacob_reyes should be banned for spreading misinformation on @Twitter.

Their game usually goes as follows: Deceiving headline & meter, and the truth found buried in the article, knowing that most people only read headlines.

Well, this assumes @Politifact ever actually did real fact-checking to begin with.