How stupid can CNN's obsession with January 6 get? Hanna Panreck at Fox News reported on Sunday, CNN.com commentator John Blake took it to a new level: 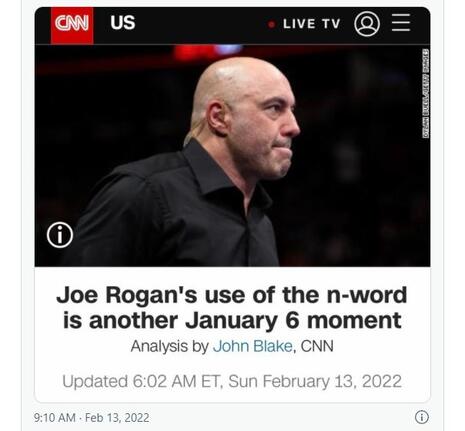 The podcaster Joe Rogan did not join a mob that forced lawmakers to flee for their lives. He never carried a Confederate flag inside the US Capitol rotunda. No one died trying to stop him from using the n-word.

But what Rogan and those that defend him have done since video clips of him using the n-word surfaced on social media is arguably just as dangerous as what a mob did when they stormed the US Capitol on January 6 last year....

It is a sign of how desensitized we have become to the rising levels of violence -- rhetorical and physical -- in our country that Rogan's slurs were largely treated as the latest racial outrage of the week.

But once we allow a White public figure to repeatedly use the foulest racial epithet in the English language without experiencing any form of punishment, we become a different country.

We accept the mainstreaming of a form of political violence that's as dangerous as the January 6 attack.

A nasty racial epithet can be a fighting word, but it isn't a "form of violence." After conservative Twitter mocked the headline relentlessly, CNN changed the headline to:

Blake also outrageously compared Rogan's N-words to the Rwandan genocide, where an estimated 800,000 people were slaughtered:

When people in positions of power use dehumanizing language to describe other groups, atrocities often follow

This is not ancient history: Consider what happened less than 30 years ago in Rwanda when some 800,000 civilians were slaughtered in a three-month period in 1994. Hutu extremists targeted both the Tutsi minority, who were a majority of those killed, as well as moderate Hutus.

What triggered the violence in part were the messages that came from people in positions of power in Rwanda. Many, like Rogan, had a public megaphone and an audience.

Oh, but  "Genocide is a worst-case scenario," he added.

Media analyst Joe Concha called it "your craptastic headline of the month." On Fox & Friends, he added "Keep going with these headlines, guys, because you're only helping him, and no one's buying it."  He added that Rogan and his podcast attract a much larger audience than CNN.