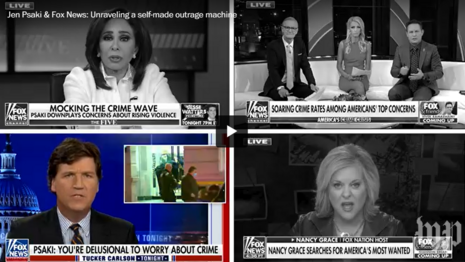 Sexton makes a great point that Psaki herself wasn't really accurate in describing what aired on Fox.

The House Republicans tweeted out this Psaki psnippet:

You know, I think it speaks to if you look at Fox on a daily basis. I mean, do you remember the four boxes that you had that we had on all the TVs, right, which is on my TV right now? So right now, just to give you a sense of CNN, Pentagon, as many as eighty-five hundred U.S. troops on heightened alert. Okay, true. Same on MSNBC. CNBC is doing their own thing about the market. And then on Fox, is Jeanine Pirro talking about soft-on-crime consequences? I mean, what? What does that even mean? Right? So there’s an alternate universe on some coverage. What’s scary about it is a lot of people watch that.

Psaki then tweeted she was taken out of context:

.. actual transcript of what I said about @POTUS strong lifelong record on fighting crime and my point was that it is often distorted for political purpose despite the facts. The @HouseGOP then cut my comments out of context (see italics) proving the point. https://t.co/65q2bQUflm

In other words, Psaki wasn’t randomly striking out against Fox News, she was actually responding to a direct question about an exchange between her and Fox News reporter Peter Doocy during the Jan. 24 White House briefing. She was arguing that Republicans paint a distorted portrait of the Biden administration’s efforts to support police, but that point got left on the cutting room floor. The clip even snipped Psaki in mid-sentence to remove her observation that the claim that President Biden was not addressing public safety “couldn’t be further from the truth.”…

It's Psaki and Usero who aren't reflecting the event as it occurred. Sexton points out that it's Fox News that is being taken out of context. Psaki was laughing about a chyron from The Five which aired on January 24. They aired an 11-minute segment which included that chyron over Jeanine Pirro. Why cover that topic that Monday? Because two NYPD officers had been shot the previous Friday night, and both died (one after this aired). That's the "soft on crime consequences" Psaki pretended were in an "alternative universe." She was suggesting it was....Fake News. Psaki wasn't watching the show, she was commenting on the chyron. Then they're upset Fox mocked her as unserious on crime. Pirro wasn't even mentioning Biden!

The Post robots don't have to like Fox News Channel, but if you're writing for "The Fact Checker," it might be a good idea to actually watch the Fox News video in question here. Or at least admit Jen Psaki's Fox News remarks were uninformed about what was actually discussed.