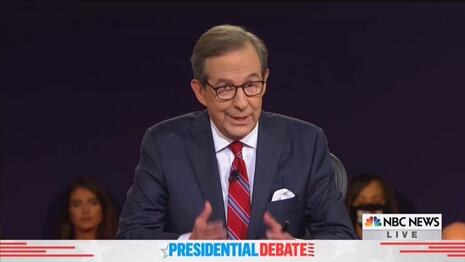 Maggie Haberman of The New York Times reports that the time for hardball has arrived. The Republican National Committee says it may require candidates to pledge to not participate in debates run by the Commission on Presidential Debates. In recent years, the moderators have caused controversy by insisting on "fact checking" the Republicans (and aiding the impression of victory for the Democrats).

One major concern is that the Commission has scheduled the first debate after early voting has already begun in some states. Another major concern is Commission members or selected moderators having ties to the Democrat nominee who's appearing. In 2020, C-SPAN host Steven Scully had been an intern for Joe Biden. Then there's the actual "correcting" the Republicans:

Republicans have long complained about how the commission handles debates, going back to the 2012 campaign, when Senator Mitt Romney of Utah was the Republican nominee against the incumbent Democrat, President Barack Obama. The moderator of the town hall-style debate, Candy Crowley, then with CNN, fact checked Mr. Romney in real time about a claim he made about Mr. Obama, prompting an outcry from conservatives.

The problem here is she incorrectly "corrected" Romney and tilted the debate analysis. As we noted in our book Collusion, Obama claimed “the day after the attack, I stood in the Rose Garden and told the American people and the world that we are going to find out exactly what happened, that this was an act of terror.” Romney shot back: “You said in the Rose Garden the day after the attack, it was an act of terror. It was not a spontaneous demonstration, is that what you’re saying?...I want to make sure we get that for the record because it took the president 14 days before he called the attack in Benghazi an act of terror.”

Crowley jumped in to assert to Romney: “He did, in fact, sir... call it an act of terror.” Obama crowed: “Can you say that a little louder, Candy?” Crowley repeated: “He did call it an act of terror.”  Not according to the transcript from the White House, which has Obama only speaking generically about how “no acts of terror will ever shake the resolve of this nation,” not assigning that label to Benghazi. Washington Post fact checker Glenn Kessler, pointed out the obvious: “He [Obama] did not say ‘terrorism’ — and it took the administration days to concede that it [was] an ‘act of terrorism’ that appears unrelated to initial reports of anger at a video that defamed the prophet Muhammad.”

On NPR on Thursday night, political Domenico Montanaro put all the blame for this controversy on Trump. "Trump has stretched both the boundaries of the truth and decorum on the debate stage. Moderators felt obligated to push back against him and take a more muscular stance,  interrupting and fact-checking him. And that really rankled him and the RNC. They saw a threat to his candidacy and to their power."

He concluded: "Trump of course routinely blasts journalists who correct his baseless claims as biased, so this debate over debates really also gets to the heart of the debate of what happens right now in journalism, Ari – you know, whether our dedication should be to a neutral objective traditional role or have truth be the north star. I think what we’ve seen in our industry has been moving far more to a strong defense of independent, verifiable truths."

Montanaro called this "working the refs," but the successful liberal demands for "real-time fact checking" of Republicans means the "referees" were already worked.