On January 6, Vice President Kamala Harris shamelessly attempted to compare the Capitol riot to Pearl Harbor and 9-11. Later that day, she was interviewed by Judy Woodruff on the PBS NewsHour, who asked absolutely nothing about that rhetoric. Instead, Woodward complained to Harris about election lies and poor attitudes and "deep polarization" -- as if the media have no role in all this. She began with a series of 1/6 softballs:

Your tax $ at work: On 1/6 anniversary, PBS @NewsHour anchor Judy Woodruff throws riot softballs at Kamala Harris. You and Joe gave "very forceful speeches." No question or mention about comparing it to 9/11 and Pearl Harbor. pic.twitter.com/earNtCiL7M

WOODRUFF: On this day, one year after the assault on the Capitol, you, President Biden speaking out very forcefully on the need to correct the lies out there about what happened and to hold former President Trump accountable. But we know, one year later, those lies have only settled in. Why do you think it is, after all this time, that attitudes have not changed?

....But just as many people today, if not more, believe lies, about what happened. What's to stop this from just staying this way, this deep polarization, for years to come?

....Given attitudes out there, do you believe the January 6 House committee will get to the bottom of what happened?

Then Woodruff heralded Liz Cheney for holding Trump fully responsible for creating the Capitol riot -- that he "summoned this mob, assembled the mob, and lit the flame of this attack" -- and asked "Is she right?" Then Woodruff suggested (as a flock of "objective" journalists have) that Trump should face criminal prosecution: "If that's the case, then does that not mean there will have to be serious consideration of a criminal prosecution?"

This is the exact opposite of how she repeatedly shamed Mike Pence at the GOP convention in 2016, that "lock her up" talk was too vicious. (Unlike "lock Trump up.")

The talk at this convention from the stage and from the delegates has been pretty harsh criticism of Hillary Clinton. We have heard, "Lock her up." We have heard -- we have seen the signs, "Hillary to prison," talk of indicting her....Do you think it's been over the top, as even some Republicans have said? 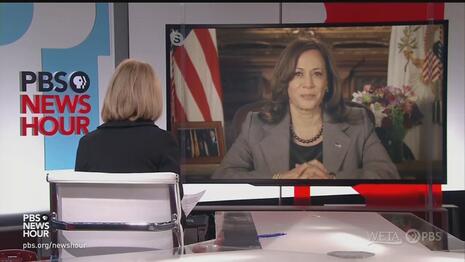 Woodruff did mildly question how effective Biden has been on "shutting down" the coronavirus: "But is it time for a new approach, is the question? I mean, this administration came in promising to get things on track. Here we are a year later. We're in the fourth wave. There aren't enough tests, nearly enough."

This was nothing like Vice President Pence’s interview on April 17, 2020, where Woodruff suggested Trump’s happy talk caused unnecessary deaths: “the president did stop travel to the U.S. on January 30. But, for days and even weeks after that, he said, the U.S. is in a good place. He said — he assured Americans everything is OK. How many lives do you believe were lost as a result of the delay by this administration?"

The PBS NewsHour is funded by....you, like it or not. And by Fidelity.