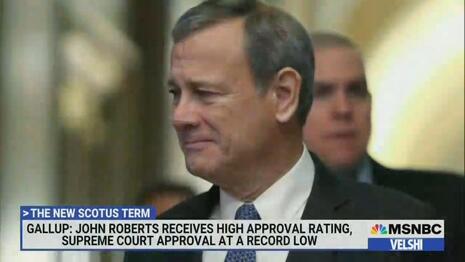 Joel Pollak at Breitbart reported Sunday that Supreme Court Chief Justice John Roberts blasted attempts to exert “inappropriate political influence” in his year-end report for 2021, as President Biden and the Democrats have pondered proposals to expand or pack the Court with liberals.

“The Judiciary’s power to manage its internal affairs insulates courts from inappropriate political influence and is crucial to preserving public trust in its work as a separate and co- equal branch of government,” Roberts said in the 2021 report. Roberts did not explicitly mention the court-packing talk, and the liberal media ignored it. T

hat's funny -- aren't they the people who care the most about governing "norms"?

Well, the message here, Mike, comes as there has been significant criticism of some of the courts' decisions recently. He is asserting the chief justice the independence of the court.

In his message that just posted, he writes, "The judiciary's power to manage its internal affairs insulates courts from inappropriate political influence and is crucial to preserving public trust in its work as a separate and co-equal branch of government." This also comes at this time that some Democrats are pushing to add seats to the highest court.

It wasn't just the networks going silent. The Washington Post didn't report it. The New York Times didn't report it -- but on that same day, they published former Supreme Court reporter Linda Greenhouse attacking the Court like the court-packers do.

The Associated Press covered the Roberts memo, but left out all the parts about "inappropriate political influence," focusing on a different newsworthy part:

WASHINGTON — Supreme Court Chief Justice John Roberts says the federal judiciary needs to do more to ensure judges don't participate in cases where they have financial conflicts of interest.

Roberts made the comments as part of his annual report on the federal judiciary released Friday evening.

Roberts pointed to a series of stories recently in The Wall Street Journal that found that “between 2010 and 2018, 131 federal judges participated in a total of 685 matters involving companies in which they or their families owned shares of stock.”

Skipping Roberts may be caused by growing liberal hatred of Roberts. Take, for example, the panel on All In With Chris Hayes on December 28:

Chris Hayes cites John Roberts as "the most effective reactionary politician of his generation."

Anand: "Roberts is the most popular right-winger in this country because he has figured out a particular art, which is how to kick a country in the groin while smiling in its face." pic.twitter.com/5jdHsI0P4o

ELIE MYSTAL: John Roberts, his entire ideal is to bend the law towards the Republican agenda as far as he can take it without breaking it. That he cares about breaking it is different, but that's his goal.

CHRIS HAYES: Quickly, Anand, as someone called him the most effective reactionary politician of his generation, and to Elie's point, I think in many ways, that's true precisely because he has gotten to do what he's wanted to do and preserve this approval rating.

ANAND GIRIDHARADAS: I agree with everything Elie said, and not just because we`re part of this three-member salt-and-pepper panel, but because this is an extraordinary case of image trumping reality and for all the reasons Elie laid out so eloquently.  I will just say, there's a larger point to mind here about right-wingers, which is John Roberts is the most popular right-winger in this country because he has figured out a particular art which is how to kick a country in the groin while smiling in its face.