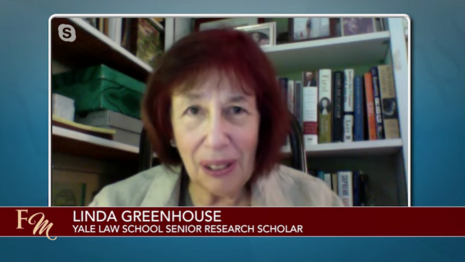 Greenhouse covered the Supreme Court as a reporter for 30 years (1978-2008). When she left the paper’s beat, she wrote “we have, most likely, the Supreme Court we deserve.” Invited to rethink it, she has changed her mind. Her Friday column attacked the new crop of Trump-appointed conservative justices.

Actually, sadly, my answer now is no.

It’s not that I think the country simply deserves a Supreme Court that happens to agree with me; I was finding plenty to disagree with back in 2008. Justice Samuel Alito had taken Justice Sandra Day O’Connor’s place in early 2006, wrenching the closely divided court to the right…..

After decades of liberal legislating from the Supreme Court, things are suddenly dangerous when there is a conservative majority of justices, two of whom were in Greenhouse’s telling were illegitimate anyway.

….we are in a different place now than we were in 2008, and the current term finds the court in a danger zone as a willing -- and willful -- participant in a war for the soul of the country. Last term’s cavalier treatment, in a case from Arizona, of what remains of the Voting Rights Act sent a frightening signal about whether the court can be counted on to protect democracy from the Republican-led assault now taking place before our eyes. We now have justices apparently untroubled by process and precedent, let alone appearances: Let’s not forget that two of Donald Trump’s three appointments arrived under debatable circumstances, with Justice Neil Gorsuch taking a seat in 2017 that was Barack Obama’s to fill and Justice Amy Coney Barrett being jammed through to confirmation late in 2020.

She irresponsibly argued for the Supreme Court to confirm abortion as a constitutional right because public polling says so (slavery was popular in the United States once as well).

Yet what we see from the court is not humility but, to put it politely, a lack of situational awareness. Polls consistently show that a majority of Americans oppose overturning Roe v. Wade, something the court has given every indication that it will do within the next six months….

Even a Times Sunday book reviewer, liberal Harvard law professor Noah Feldman, thinks Greenhouse’s new book on the death of Justice Ginsburg and addition of Justice Barrett goes overboard in condemnation of Barrett, while jumping the gun on the frighteningly conservative court.

Maybe because it’s hard to write a drama in which the villain hasn’t done anything terrible yet, Greenhouse makes an uncharacteristic misstep in a brief excursus that compares the new justice to the late Phyllis Schlafly….her anti-feminist crusade against women in the workplace sits oddly with Barrett’s lifelong pursuit of a full-time career as a law professor and judge while raising seven (no, that’s not a typo) children. The only motivation for the invocation of Schlafly seems to be that, as Greenhouse notes, she was the subject of a television mini-series in 2020, and that both were lawyers with large families. “Forty years later, more than a few people looked at Amy Coney Barrett and saw Phyllis Schlafly,” Greenhouse writes, with no indication of who those people were. “And how could they not, given the similarity in the two women’s biographies?” This isn’t even guilt by association. It’s guilt by free association.