In the last week, alarms started going off about Vice President Kamala Harris facing an embarrassing staff exodus by her communications team, including well-known strategist Symone Sanders. By Saturday morning, December 4, The Washington Post reported on the front page that this morale problem “reignites leadership concerns.” How can she take over for Biden?

The Post buried the edgy point right off the front page. “Critics scattered over two decades point to an inconsistent and at times degrading principal who burns through seasoned staff members who have succeeded in other demanding, high-profile positions.”

Anonymous ex-staffers who worked for Harris before she was vice president complained Harris refused to peruse briefing materials prepared by staff, then berated them when she looked unprepared. 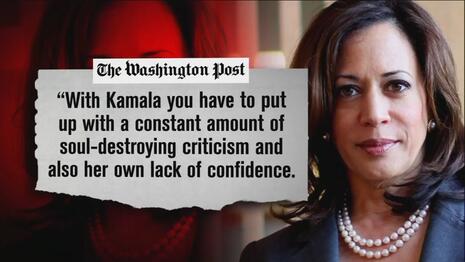 The hot quote from behind the wall was this. “It’s clear that you’re not working with somebody who is willing to do the prep and the work...With Kamala you have to put up with a constant amount of soul-destroying criticism and also her own lack of confidence. So you’re constantly sort of propping up a bully and it’s not really clear why.”

A search of cable news found nothing on MSNBC, and one two-minute discussion with Post reporter Tyler Pager on that Saturday morning on CNN -- at 6:42 am. You mostly hear about this on conservative media -- Fox, Newsmax, OAN.

The syndicated TV gossip show Inside Edition reported the hot quote about Kamala the soul-destroying bully on Monday as they reported on her attendance at the Kennedy Center Honors show. Their top story that night was “Butt Lift Surgery.” But they’re doing more thorough White House reporting than ABC, CBS, and NBC.

As things have turned sour for the veep, with one poll putting her approval rate at 28 percent, the networks have aerobically ignored negative news. Instead, two networks touted Kamala getting her booster shot on October 30. On November 6, ABC’s Zohreen Shah reported the Earth-shaking news that Kamala “lit up her home in bright colors” for the Hindu festival of Diwali (puffing her double-minority biography, that her mother came from India). The networks dutifully reported her sober statements after the trials of Kyle Rittenhouse and the killers of Ahmaud Arbery.

On November 19, they all reported the “historic” factoid that Kamala was the acting president for 85 minutes as President Biden had a colonoscopy. And the December 2 Today on NBC informed the nation that Doug Emhoff, the first Jewish spouse of a vice president, lighted the “National Menorah” near the White House.

The only real scrutiny came on November 18, when ABC’s Good Morning America aired a pre-recorded interview with Vice President Harris that lasted six minutes. At the end, George Stephanopoulos asked touchy questions about tensions between Biden and Harris and that some friends think she is “underused.” She gave a droning non-answer. The “PBS NewsHour” offered a brief story on that exchange, adding “the White House denied any tensions.” The other networks did nothing.

Even ABC’s World News Tonight skipped that part, but on the night before the big interview aired, anchor David Muir offered a scintillating tidbit that the vice president discussed how “bringing internet to all corners of rural America will help countless families.”

These networks celebrate Harris as "historic," and that translates into trying to cover her career in bubble wrap and protect her from the kind of scrutiny reporters usually apply -- even to white Democrats. She's a heartbeat from the presidency, but any notion that these outlets are all about reporting skeptically on all powerful people is daft.