The headline was "Rick Scott wrongly warns FBI coming after loud parents at school board meetings."

Joe Biden’s attorney general wants the @FBI to go after parents for speaking out at school board meetings to protect kids from radical curriculum like critical race theory.

This was the quickie version of the check:

IF YOUR TIME IS SHORT

Greenberg quoted from Garland's memo....but never imagined whether he should check the liberal argument, if there has in fact been a "disturbing spike" in threats or violence at school administrators. Does anyone have a count?

"In recent months, there has been a disturbing spike in harassment, intimidation, and threats of violence against school administrators, board members, teachers, and staff who participate in the vital work of running our nation's public schools," Garland wrote Oct. 4. "While spirited debate about policy matters is protected under our Constitution, that protection does not extend to threats of violence or efforts to intimidate individuals based on their views."

The only note of balance in this piece is law professor Eugene Volokh arguing "Garland mentioned harassment and intimidation. If he had stopped with criminal threats, we would agree. But I’ve seen the terms ‘harassment’ and ‘intimidation’ used very broadly. I can see someone at a meeting worrying that if they get up too often, or they say too much, they might be charged."

Greenberg seems to be following Senator Scott's remarks extra-closely. Just two weeks before, Greenberg also slammed him as "Mostly False" for insisting Democrats should raise the debt limit by themselves since "Democrats are responsible for the massive spending and debt growth." He even made a video for PolitiFact:

Greenberg has pounced on Scott seven times this year -- all of them "Mostly False" or "False." Overall, in 2021, Jon Greenberg has 28 fact checks on Republican politicians or entities, and just seven on all Democrats. Four of those were on President Biden. Greenberg's two fact checks on Senate Democrats (Tim Kaine and Sherrod Brown) were both rated "True." 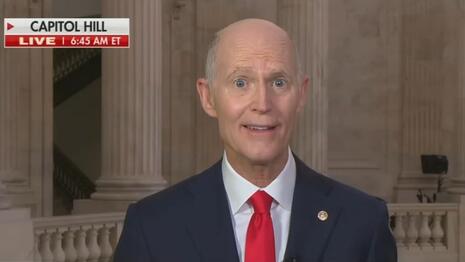 Overall, Rick Scott has 172 fact checks from PolitiFact -- 80 of them Mostly False or worse. Senate Majority Leader Charles Schumer has...23.

Let's guess this is because Scott is from Florida, and PolitiFact is a project of the Poynter Institute in Florida. But Scott defeated Democrat Sen. Bill Nelson, and Nelson has only 30 fact checks. Fully half of those were "True" or "Mostly True," and only six were "Mostly False" or "False."

In June, I reported that 33 of the 50 Senate Democrats had fewer than 10 fact checks.

Attorney General Merrick Garland has zero fact checks from PolitiFact, ever. Four years ago, Attorney General Jeff Sessions already had eight PolitiFact checks at this point in his tenure, and had 16 during his time at Justice -- and ten were "Mostly False" or "False."

There were three fact checks about Jeff Sessions -- all on Democrats, all three of them "True".