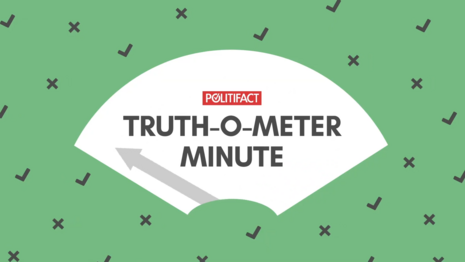 At their recent “United Facts of America Festival,” PolitiFact interviewed Sen. Mark Warner (D.-Va). Their executive director Aaron Sharockman began with some light humor, telling Warner he was one of the more accurate members of Congress. Sharockman complimented Warner for having zero "Pants on Fire" rated claims.

Warner joked "That feels like it should be a low bar. Unfortunately, I don’t think it is."

It's not exactly a tough bar. In fact, my review of all PolitiFact pages for current U.S. Senate Democrats finds that almost every Democratic Senator has zero “Pants on Fire" ratings.

Four Democrat senators have one flaming-pants demerit in the PolitiFact archives: Majority Leader Chuck Schumer, Majority Whip Dick Durbin, Kirsten Gillibrand, and Sherrod Brown. No Senate Democrat has more than one. That's right: Bernie Sanders has none. Elizabeth Warren has none. Ethically challenged Robert Menendez has none. Even Vice President Kamala Harris has none.

In fact, 16 Democrat senators (plus independents Bernie Sanders and Angus King of Maine, who caucus with the Democrats) have zero ratings on the False side of the meter. Some have zero ratings whatsoever: Tom Carper of Delaware, Mazie Hirono of Hawaii, and Martin Heinrich and Ben Ray Lujan of New Mexico.

Most Democrat Senators don't even have double-digit fact-check totals. By my calculations, 33 of the 50 members of the Democrat caucus have fewer than 10. Dianne Feinstein’s been in the Senate since first being elected in 1992, and she has eight overall. Patty Murray was also elected that year, and she has two -- a “True” and a “Mostly True.” Patrick Leahy came to the Senate in 1975, and he also only has a “True” and a “Mostly True.”

You could guess that seniority doesn’t matter much, since PolitiFact arrived in 2007, but it should mean they are more important members of Congress. This just shows you that PolitiFact is kind of bored with fact-checking most of Congress, even the leaders. Chuck Schumer has only 22 fact-checks overall.

That changes if you run for president. Ted Cruz has 149 fact checks, and Marco Rubio has 154. The only Democrat Senator like them is Bernie Sanders, with 169. But then there is the matter of how many times they’re tagged as “Mostly False” or worse. Bernie has only 44 on that False side of the ledger, while Rubio has 71 and Cruz has a robust 100. Rubio has five "Pants on Fire" ratings and Cruz has eleven, while the entire Democrat half of the Senate has only four.

Add it up, and Bernie was rated on the False side about 26 percent of the time, compared to 40 percent for Rubio, and 67 percent for Cruz.

Last July, in one of their YouTube videos entitled "What Is Politifact's Agenda?", PolitiFact editor-in-chief Angie Drobnic Holan insisted "The PolitiFact agenda is: Don't take sides with any politician or party." She claimed: "We're independent, and we work hard to find the truth. So we follow the facts wherever they take us, regardless of who made the claim."

PolitiFact is transparently selective in its "fact checking" targets and "Truth-0-Meter" ratings. Liberals love to claim that conservatives just lie a lot more, and they've used PolitiFact to claim that somehow inveterate liars like Hillary Clinton are the most honest politicians. All of that underlines that PolitiFact is a liberal media outlet.