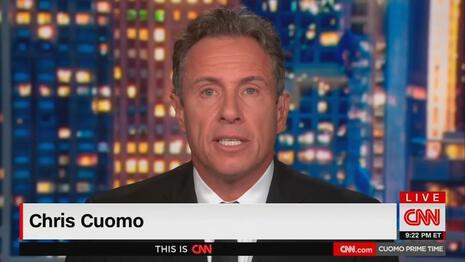 On Friday morning, The New York Times posted a "Guest Essay" by longtime TV executive Shelley Ross with the eye-opening headline "Chris Cuomo Sexually Harassed Me. I Hope He’ll Use His Power to Make Change." Wouldn't this have packed a bigger wallop right around his brother's petulant resignation as governor? Or before? Ross makes clear she doesn't really want Cuomo to be fired. She wants Cuomo to "make up for it" with #MeToo TV specials.

Ross wrote she was provoked by Chris announcing on air that he couldn't report on his brother -- instead of deciding he couldn't advise his brother on how to defeat his sexual harassmentg accusers. Then, "there was Mr. Cuomo in the Hamptons, appearing in a photo wearing a T-shirt emblazoned with the word 'Truth.'” That was too much.

The harassment occurred in 2005, when Cuomo grabbed Ross in the rear:

“Now that I think of it … I am ashamed,” read the subject line of a 2005 email Mr. Cuomo wrote me, one hour after he sexually harassed me at a going-away party for an ABC colleague. At the time, I was the executive producer of an ABC entertainment special, but I was Mr. Cuomo’s executive producer at Primetime Live just before that. I was at the party with my husband, who sat behind me on an ottoman sipping his Diet Coke as I spoke with work friends. When Mr. Cuomo entered the Upper West Side bar, he walked toward me and greeted me with a strong bear hug while lowering one hand to firmly grab and squeeze the cheek of my buttock.

“I can do this now that you’re no longer my boss,” he said to me with a kind of cocky arrogance. “No you can’t,” I said, pushing him off me at the chest while stepping back, revealing my husband, who had seen the entire episode at close range. We quickly left.

Soon after, I received the email from Mr. Cuomo about being “ashamed.” He should have been. But my question today is the same as it was then: Was he ashamed of what he did, or was he embarrassed because my husband saw it? (He apologized first in his email to my “very good and noble husband” and then to me for “even putting you in such a position.”) Mr. Cuomo may say this is a sincere apology. I’ve always seen it as an attempt to provide himself with legal and moral coverage to evade accountability.

Ross even reproduced his email:

Cuomo tried to claim he had no "negative intent" in harassing Ross:

If Mr. Cuomo and CNN management don’t think he crossed a serious line, one that warrants consequences, I know he crossed a line with me. At one point in his 2005 email to me, he referred to how “Christian Slater got arrested for a (kind of) similar act (though borne of an alleged negative intent, unlike my own).” Mr. Slater was arrested after a woman reported that he had grabbed her buttocks as she walked down the street. Police charged him with third-degree sexual abuse. (The charges were dropped.) Mr. Cuomo, a former lawyer, appeared to use his short apology to legally differentiate the two incidents. He suggested Mr. Slater had “negative intent” while he, Mr. Cuomo, did not. He seemed to have a keen understanding of what accountability might look like back then; today we have no clear idea if either he or CNN is interested in accountability.

I never thought that Mr. Cuomo’s behavior was sexual in nature. Whether he understood it at the time or not, his form of sexual harassment was a hostile act meant to diminish and belittle his female former boss in front of the staff.

The Times included a new response:

(Asked for comment, Mr. Cuomo said on Thursday night, “As Shelley acknowledges, our interaction was not sexual in nature. It happened 16 years ago in a public setting when she was a top executive at ABC. I apologized to her then, and I meant it.”)

Ross also discussed harassment from the late Fox News boss Roger Ailes to alert both sides of the media:

I have fought sexual harassment in the workplace for 40 years now, and it can feel exhausting at times. In 1981, Roger Ailes insisted to me that we have a “sexual alliance” or my pending job offer at NBC’s Tomorrow show would be withdrawn. I called a lawyer and worried it might be the end of my budding television career. To my surprise, Mr. Ailes never denied it. He apologized profusely for what he called “middle age craziness” and persuaded me to accept the job, promising we’d never have another problem. I accepted it, naïvely thinking I could help reform the workplace one predator at a time.

I’m not asking for Mr. Cuomo to become the next casualty in this continuing terrible story. I hope he stays at CNN forever if he chooses. I would, however, like to see him journalistically repent: agree on air to study the impact of sexism, harassment and gender bias in the workplace, including his own, and then report on it. He could host a series of live town hall meetings, with documentary footage, produced by women with expert consultants. Call it “The Continuing Education of Chris Cuomo” and make this a watershed moment instead of another stain on the career of one more powerful male news anchor.