NewsBusters Podcast: Liberal Media Lies and Smears About Whips and Reins at the Border 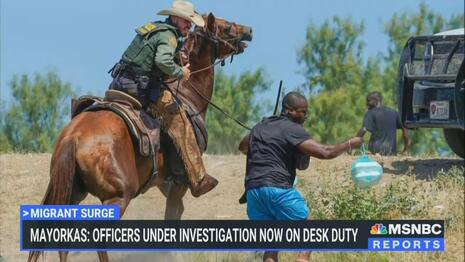 For our latest podcast, he hot topic on the liberal-bias front is the Fake News about the Border Patrol whipping Haitian immigrants at the southern border in Texas. There are no whips. There are only reins to control the horses. But the supposedly responsible, fact-based media -- including ABC, CBS, CNN, and MSNBC -- have all been guilty of a false whipping narrative.

Then there was a fall-back, to the notion that there were "horrific images" of "trying to corral human beings like cattle." Joy Reid claimed it was like the Fugitive Slave Act days in the 19th century. Except, this time, the so-called slaves are rushing to get into our "racist" South.

We also discuss the Biden PR team desperately seeking to shut up the press corps as British prime minister Boris Johnson upset the president by taking questions from British reporters. Then there's the notion that the media's focus on the disappearance and death of young Gabby Petito shows the media's racism....or does it show the media's fear of being accused of racism?