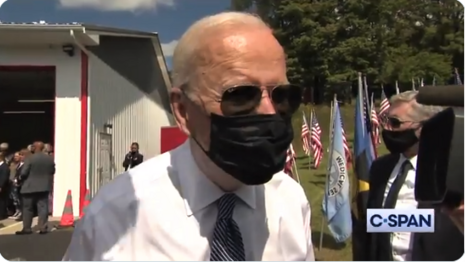 Team Biden underlined the president would be "deliberately staying in the background" of 9/11 ceremonies, so people didn’t question his Afghanistan fiasco. The very helpful Washington Post headline was “Biden quietly marks milestone anniversary of 9/11 attacks."  They reported both that Biden was "leading a day" of mourning, but "deliberately stayed in the background."

He still managed to say some wacky stuff on camera. Like implying all the 9/11 victims would despair at people putting "F Biden" on a protest sign.

Then we explore how the COVID experts discussed Biden's vaccine mandate on the Sunday shows. Former Trump appointee Scott Gottlieb was skeptical on CBS. Biden appointee as Surgeon General, Dr. Vivek Murthy claimed the country needed to unify around Biden's orders...just like a guy who once headed Doctors for Obama and lobbied for Obamacare.

Finally, CNN's Brian Stelter addressed the California recall in very predictable ways. He highlighted how Trump backers in California are sowing doubts about the integrity of the voting there, without acknowledging California sends mail-in ballots to absolutely everyone, even citizens who didn't request a ballot. It was also typical for Stelter to slime black conservative candidate Larry Elder like he's a self-loathing black man who's "performing" for white Fox audiences.

Enjoy the podcast below, or wherever you enjoy podcasts.