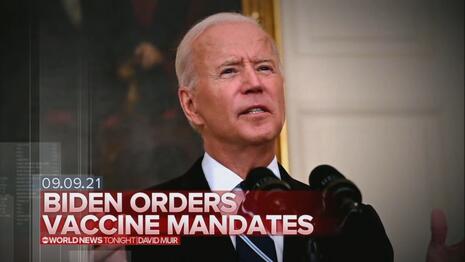 Instead of discussing his failed Afghanistan policy on the weekend of 9/11, President Biden tried to change the subject and please the Democrat base by getting out the "hammer" of vaccine mandates for government, and even for businesses of more than 100 employees. Much of this might be overturned, but the media celebrated it anyway.

ABC's David Muir touted Biden "taking aim at local officials that he said are actively working to undermine the fight against COVID by opposing mask and vaccination mandates." CBS anchor Norah O'Donnell preferred clothing metaphors: "President Biden is taking off the gloves to get more Americans to roll up their sleeves." And NBC's Lester Holt highlighted "President Biden tonight is trading out the velvet glover for a hammer."

We also discuss Peter Doocy questioning Jen Psaki about the Biden team calling the Taliban "businesslike and professional" while their leaders are still on the FBI's Most Wanted list, a white woman in a gorilla mask throwing an egg at black Republican Larry Elder, and CNN celebrating a 14-year-old girl "flipping the bird" at moms protesting mask mandates in school. The same CNN trashed pro-life teenager Nick Sandmann for wearing a MAGA hat and merely smirking at a man who was beating a drum in his face. At least he forced CNN to give him a financial settlement for all the abuse.

Finally, we remember the media's worst outbursts after 9/11. Enjoy the podcast below, or wherever you listen to podcasts.