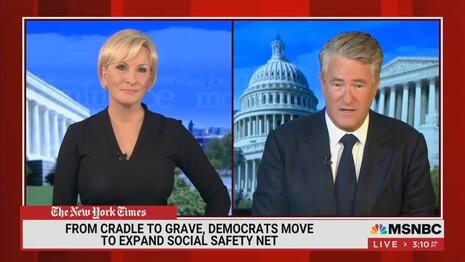 After the Labor Day weekend, Joe Scarborough sat on the set of Morning Joe and told the Democrats that to succeed in the midterms, it was essential that they somehow repeal “40 years of Reaganism” by passing a massive expansion of government disguised as an “infrastructure” package.

“I remember hearing Biden's speech back in April and was shocked by how sweeping it was for this supposed moderate guy from Delaware,” Scarborough proclaimed. “This will reverse 40 years of Reaganism just like Ronald Reagan reversed 45 years of Roosevelt's New Deal.”

Scarborough touts "how big this ["infrastructure"] bill is, how sweeping this bill is, how historic this bill is....I remember hearing Biden's speech back in April, and was shocked by how sweeping it was for this supposed moderate guy from Delaware.” It would reverse Reaganism. pic.twitter.com/TBvm0XjccX

Now, believers in Reaganism would look at the last five years of big spending hikes and suggest Reaganism has not exactly dominated in recent federal budgets. But that’s the framing for anyone now opposing a “historic” expansion of the state.

Scarborough insisted Democrats have to agree to pass something enormous. “[C]ompromise has to be found. They have no other choice. They have to make history or, of course, there will be no justification for them to run for re-election.”

Joe Scarborough says Democrats HAVE to reverse Reaganism with a massive "infrastructure" bill.

"[C]ompromise has to be found. They have no other choice. They have to make history or, of course, there will be no justification for them to run for re-election." pic.twitter.com/i74ulkX7Iu

This Scarborough segment was not unusual for TV “news” punditry. There is a tone when Democrats are in the White House and hold a majority in Congress, however narrow. Anchors and pundits and correspondents have a tendency to talk about How Democrats Succeed. It’s not unlike say, the local sports channels on a Washington Football Team show: How does our team win? What do they need to improve on? In this case, how can they pass some “landmark” legislation and look “historic”? They fawn over Democrats, favor them, coach them, and only fault them when the polls falter.

These networks cheered along and gave free publicity to Texas Democratic state legislators when they flew to DC to lobby quite hopelessly for Congress to pass the “For the People Act” federalizing election laws. Almost every strategy that Democrats attempt – even the quixotic ones – are promoted and explained by a pliant press.

Obviously, in the Trump years, these TV pundits and correspondents didn’t ask “How do Trump and the Republicans succeed?” Instead, Trump was treated like a horror-movie monster threatening everything Americans hold dear. The Republicans were perpetually denounced for refusing to cast Trump out into the political wilderness. Four years ago, Scarborough insisted Trump was mentally unfit, “that people close to him during the campaign told me had early stages of dementia.”

He would never say anything like that about this president.

In a similar way, Democrats are always presumed to be operating in a “mainstream” of public opinion. They’re almost never “extreme” on anything, never wildly out of touch with the public mood. The media pretend that they can speak for the masses and what they want. If anything, journalists press Democrats to take more extreme steps, like scrapping the filibuster, to get the win.

But the Republicans receive the opposite. They have been quite routinely described as dangerously extreme on issues, and even largely popular stances – like standing for the national anthem – are presented as wildly controversial matters that are cynically exploited.

All of this can turn out as the media would like, that they have almost hypnotized the voters into supporting a Democrat agenda. Or it always has the potential to backfire, and the media give Democrats a false sense of security and popularity. Then, when they lose elections after going ideologically overboard, they have trouble believing that it’s a real result.

Whatever the outcome, our media cannot be expected to resemble a “referee” or a neutral observer. They can’t help but expose their rooting interest, like a streaker on the playing field of politics.