Caleb Howe at Mediaite reports that The New York Times changed a headline on a mostly sympathetic story about Joe Biden invoking his late son Beau Biden...very routinely. It's obvious this is another occasion when the paper's overwhelmingly liberal audience reacted badly, like Tommy Christopher of Mediaite, to "Biden, Still Grieving His Son Beau, Finds That Not Everyone Wants to Hear About It."

The original: @nytimes: "Biden, Still Grieving His Son Beau, Finds That Not Everyone Wants to Hear About It"

Is the headline false? Obviously not. But the Biden voters think it rudely implies the president talks too much about it -- not that it's insulting to jerks who don't want to hear about it. This is surely the same audience that couldn't handle the headline “Trump Urges Unity vs. Racism” because it sounded too positive.

The bottom of the article reports the headline on page one in the New York print edition was "Biden Is Still Mourning a Son, But Some Can’t Bear His Grief."

Howe added "It is not clear why the headline was changed, but neither version does a great job of representing the tone or content of the article." 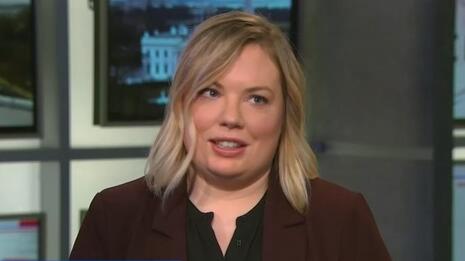 There was one negative thought in this Katie Rogers article -- which was obscured by the headline, which could have been "Grieving families find Biden invoking his son sounded scripted." Because that's what they said. Take the Washington Post account of Rylee McCollum's family.

The president brought up his son, Beau, according to her account, describing his son's military service and subsequent death from cancer. It struck the family as scripted and shallow, a conversation that lasted only a couple of minutes in "total disregard to the loss of our Marine," [sister] Roice said.

That's not the relative that the Times picked, they picked the father of Jason Schmitz. “I respect anybody that lost somebody,” Mr. Schmitz added in an interview, “but it wasn’t an appropriate time.”

Rogers mostly used this article to pour sugar on Beau yet again, and tout Biden's "reputation" -- as opposed to his (and the paper's) messaging.

Mr. Biden’s reputation is staked, in part, around his ability to withstand soul-shattering tragedies. His first wife, Neilia, and his infant daughter, Naomi, were killed in a car accident in 1972. But it was Beau’s death that left the people in Mr. Biden’s life wondering if he would ever recover, let alone wage a third bid for the presidency. His son, they say, is a major reason he decided to stay in public life.

“He is a relentlessly optimistic person,” said Shailagh Murray, a former adviser of Mr. Biden’s, “and in many respects, Beau was the human embodiment of that optimism.”

For the record, Murray was a political reporter for The Washington Post before she became a Biden adviser in the Obama years. She's still spinning. While grieving families complain, Murray claimed “I’m sure he understands the reaction he got better than a lot of people.” No. He doesn't. 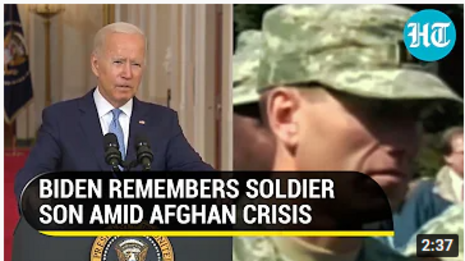 Invoking Beau’s memory amid the violent collapse of Afghanistan, the result of the most politically volatile decision of his presidency to date, provided a rare moment for critics to pounce on a penchant for eulogizing his son.

“Mr. Biden is not a Gold Star father and should stop playing one on TV,” William McGurn, a speechwriter for President George W. Bush, wrote in an op-ed in The Wall Street Journal. Mr. Biden has never claimed that his son died in combat, but he has often spoken of his son’s overseas deployment and the toll it took on his family. Mr. Biden’s supporters say that military families are entitled to their grief, but that the president is also entitled to his.

Here they quoted Fred Guttenberg, father of a Parkland shooting victim, to stick up for Biden.

But Biden routinely tells everyone his son served in Iraq and earned a Bronze Star, which implies heroism on the battlefield. From the first 2020 presidential debate: “My son was in Iraq and spent a year there,” Biden said to Trump, raising his voice. “He got the Bronze Star. He got a medal."