UPDATE: On Friday, both Snopes and USA Today offered corrections (see links below), acknowledging Biden looked at his watch multiple times at Dover. USA Today added "Corrections & Clarifications: This story was updated Sept. 2 to note that Biden checked his watch multiple times at the dignified transfer event, including during the ceremony itself. The rating on this claim has been changed from partly false to missing context." It seems obvious that it was USA Today that was partly false and missing context.

America’s leading “fact checkers” describe themselves as “independent.” But watching their energetic defenses of Joe Biden’s politically damaging behavior reveals they are taking a side. In the first 100 days, I found PolitiFact evaluated Biden’s critics eight times more often than they “fact checked” the president.

It was truly shocking when President Biden was caught on video checking his watch at Dover Air Force Base on August 29 as the caskets of American soldiers were unloaded into vans, both Snopes.com and USA Today felt the urgent, throbbing need to claim that the grieving family members who complained were wrong. 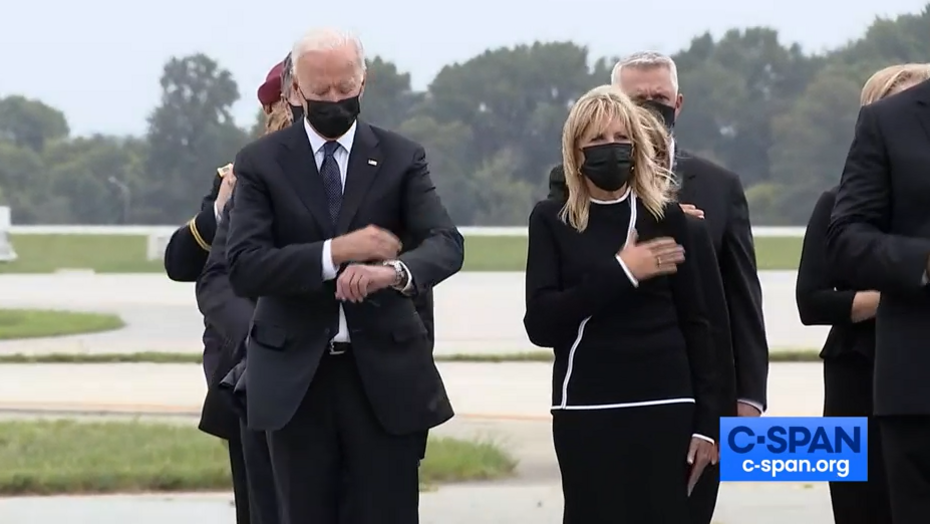 USA Today’s Daniel Funke argued “Biden has taken heat from all sides for the chaotic evacuation of U.S. troops, citizens and allies from Afghanistan. But the claim that he checked his watch instead of honoring the fallen service members is wrong.” Funke linked to footage from C-SPAN, saying Biden only checked his watch after the ceremony was over. But that footage cut away from Biden routinely.

On August 30, the night after the ceremony, two Gold Star fathers, Darin Hoover and Mark Schmitz, appeared on “Hannity” on Fox News and bitterly complained that they say Biden repeatedly checking his watch during the ceremony. “That didn't happen just once. That happened on every single one that came out of that airplane,” Hoover said. “They would release the salute and he looked down his watch on every last one, all 13, he looked down at his watch.”

Sean Hannity asked Schmitz if he saw the same thing. “Yes, I did. I actually leaned into my son's mother's ear and I said, 'I swear to God, if he checks his watch one more time,' and that was only probably four times in, I couldn't look at him anymore after that.” He called it “the most disrespectful thing I've ever seen.”

A third Gold Star parent, Shana Chappell, unloaded in a Facebook post: “I watched you disrespect us all 5 different times by checking your watch!!! What the f*ck was so important that you had to keep looking at your watch????”

USA Today has ruled they are “wrong.” That means social media posts claiming Biden checked his watch get squashed.

Snopes also ran a “fact check,” but at least they acknowledged the Hannity segment. They rated it a “Mixture” on the basis that there is “no video or photographic evidence to support the claim that Biden checked his watch 13 times during this ceremony.”

They admitted “While it doesn’t appear as if Biden checked his watch at any other point during this solemn service, the president was frequently off-screen during news footage of this event so we can’t vouch for all of his movements.”

So why do a “fact check”? Unless you want to create a social-media rebuttal for the complaints of mourning relatives?

It’s no surprise that back in 2005, Snopes co-founder David Mikkelson defended grieving relative Cindy Sheehan from the notion she did not raise her son Casey after she and her husband were divorced. In fact, they divorced after Casey died in Iraq.

A look at their search engine suggests Snopes never “fact checked” Sheehan when she appeared with Venezuelan strongman Hugo Chavez in January 2006 and proclaimed “I know you had Harry Belafonte here a couple of weeks ago, and he called George W. Bush ‘the greatest terrorist in the world.’ I agree with him.”

So let’s sum up: a grieving parent who says Joe Biden looked at his watch is “wrong.” But Cindy Sheehan gets a free pass to call Bush a mega-terrorist. That’s not “independent” fact-checking.