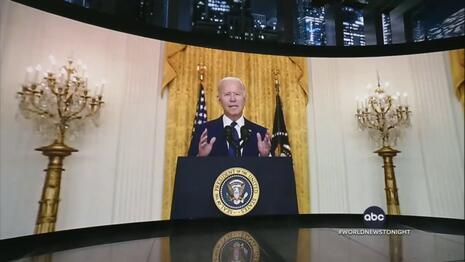 Most Americans have looked at the botched withdrawal from Afghanistan and considered it an embarrassment to America. But flagrantly pro-Biden journalists are energetically spinning that everything is quite hunky-dory...right up until Thursday's suicide bombing that killed 13 Marines and 169 civilians, as they still try to separate human remains.

On Wednesday, Eric Levitz of New York magazine claimed this "fiasco" talk was a media-created illusion! The headline:

Levitz began with this soon-ruined sentence: "America’s withdrawal from Afghanistan has yet to cost our nation a single casualty."

He continued: "The latest polls have shown sharp drops in Biden’s approval rating, driven in part by widespread opposition to “the way” his administration handled its (otherwise popular) exit from Afghanistan. Yet this political fiasco is not a development that the media covered so much as one that it created." The idea of withdrawal is popular, but the actual withdrawal is losing its polling support.

Imagine being someone called @EricLevitz at a website called @NYMag and writing this a day before hundreds of people — including many of your own countrymen — were murdered. pic.twitter.com/ItpJFvMbQz

Levitz admits he's a lefty who read radical Noam Chomsky in the Bush years. This isn't the first time he's seemed desperate to defend his favored politicians. Please see his 3,000-word manifesto from 2019 on how “Alexandria Ocasio-Cortez’s Critique of Fact-Checking Is Valid.”

Then on the same website there's Jonathan Chait, who on Thursday authored a piece implausibly titled "Why The Media Is Worse for Biden Than Trump." This is why we try to make arguments based on actual news reports and studies of trends. Chait just seems to be engaged in emotional guesswork, and he knows he sounds silly:

Didn’t the media hound Donald Trump for four straight years at least as hard as it’s hounded Biden over the last week?...

That sounds laughable to conservatives. In Chait's mind, there is never a week or a day or even an hour when Trump received negative coverage on Fox News....not even when they were covering live impeachment proceedings (twice).

Even the most dishonest, incompetent, and scandal-ridden Republican presidency imaginable — which more or less describes the one we just had — will still have a media environment divided almost equally between scorching criticism and obsequious fawning. On Trump’s worst days, the Fox News chyrons depicted him as a triumphal leader. On Biden’s best days, the conservative media was still giving him hell. In recent days, CNN and MSNBC looked a lot like Fox News, all hyping chaos in Afghanistan 24/7. That is the kind of comprehensive media hostility Trump never had to worry about.

But Chait doesn't attempt to prove either that Trump coverage was half "obsequious fawning" on his worst days or that Biden's now getting "comprehensive media hostility."