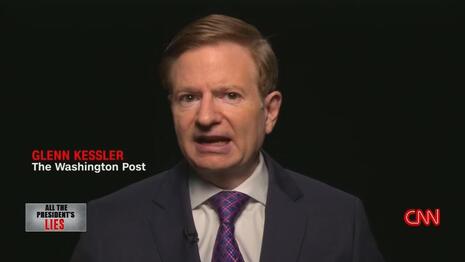 John Sexton at Hot Air aptly summarized the exposed modus operandi of Washington Post "Fact Checker" Glenn Kessler, and how he can be caught going after conservatives based on faulty assumptions.

Kessler's intended prey was Christopher Rufo, the prominent critic of "critical race theory." But he had to fold his "fact check" when his suspicions of plagiarism were destroyed.

Kessler sent a note to Karlyn Borysenko on the job site LinkedIn, asking her if she could help him throw his Pinocchios at Rufo. He was preparing an expose of plagiarism, discrediting Rufo as an expert:

In various interviews, Rufo has claimed that he became aware of CRT because he got a tip from an anonymous Seattle employee about the CRT program there. But through a public-records request I have discovered that his query to the city (sent on June 17) instead cited a tweet that you made on June 16…

In other words he was piggybacking off of your research and has been falsely claiming he has an anonymous tipster helping him. And now it seems he hijacked the whole thing into some kind of anti-White attack, which I don’t think was your original intention.

He was so enamored of this theory that he requested “please don’t tweet or mention this until after I publish." But Borysenko turned out to be tremendously uncooperative. She tweeted out a copy of his request:

Hi @GlennKesslerWP: @realchrisrufo and I were talking to the same anonymous tipster.

This person came to both of us with the same information. So, yes, that person absolutely exists. And no, I don't believe Rufo hijacked anything. I'm grateful for his work.

She added more to the thread! Kessler had written expressing disappointment she exposed his email!  He also claimed he never suggested the anonymous tipster didn’t exist...as if no one can comprehend his theorizing that Rufo "has been falsely claiming he has an anonymous tipster helping him."

Hi @GlennKesslerWP: Sorry you're disappointed, but I'm disappointed that the @washingtonpost is doing yet another hit piece on him. It's ridiculous.

Regardless, the whistleblower is real and was talking to both of us. Rufo is ALWAYS on strong ground. pic.twitter.com/ZbW3cNx5h2

Rufo responded by tweeting "You'll notice that the WaPo's 'fact-checker' begins with a series of faulty assumptions and political biases, then attempts to fill in his narrative from there. The last time the WaPo came after me, they had to retract huge portions of the story; it won't work this time, either."

We wrote it up in June when Rufo shredded a Post hit-piece attempt.

He then tweeted his victory lap, that Kessler was dropping his "Fact Check."

WINNING: The Washington Post "fact checker" has canceled his hitpiece against me after @DrKarlynB brutally corrected his series of faulty assumptions, pre-conceived narrative, and obvious political bias.

Borysenko made a fun video summarizing the whole contretemps. She mocked the whole idea that journalists would "piggyback" on her work. As if this isn't something the entire media does on the big scoops. Everybody copies the reporting, and then tries to add to it.