The Washington Post bumbled through a Saturday article attacking Christopher Rufo, an investigative journalist and prominent opponent of “critical race theory” in our schools. Rufo took to Twitter to accuse the Post of five lies in the article by reporters Laura Meckler and Josh Dawsey.

At least three versions of the story exist at online archive sites like this. Even the Post altered the story from its original errors. But you'd never know how wrong it was by looking at the current version, which only carries this note in small text at the bottom:

This report has been changed to clarify the sequence of events that followed Rufo’s appearance on Fox News last summer. In addition, the story adds a clarification from the Cupertino superintendent that a lesson was presented once before it was canceled. 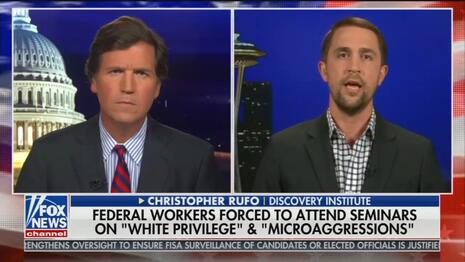 The most obvious, shameless error came near the top. Meckler and Dawson predictably led the story with the Orange Hate Object: "President Donald Trump was watching Fox News one evening last summer when a young conservative from Seattle appeared with an alarming warning, and a call to action."

This followed: "The reaction to Rufo's appearance that evening on Fox News [discussing critical race theory in the federal government] was swift. The next day, Trump demanded action and, Rufo was soon in the White House for a meeting. Two days later, his budget chief issued a memo laying the groundwork for the federal government to cancel all diversity trainings. An executive order followed," the Post reporters wrote.

"Soon"? Rufo rebutted: "The Washington Post's account is false. I appeared on Fox News September 1st, the memo was released September 4th, and the executive order was released September 22nd. I didn't visit the White House until October 30th. The reporter distorted the basic timeline of events, despite the fact that this the information was easily available to the public. If this was deliberate, it suggests malice; if it was accidental, it suggests incompetence—both of which undermine the credibility of the report."

The adapted article now has the weird juxtaposition of "The reaction to Rufo's appearance that evening on Fox News was swift," and then "Rufo was invited to the White House a few months later for a meeting." It doesn't sound so swift any more.

Rufo also forced a correction from the very end of the article on a Cupertino, California controversy. "The Washington Post claims that my reporting about a "power and privilege" training at a Cupertino elementary school never happened. But I have hard evidence from a parent and the school's own principal, who confirms that the training did occur."

The original article ran a quote from Cupertino school board president Jerry Liu insisting “Classroom instruction with these materials never went forward." That was false.

Now it ends this way:

Jerry Liu, president of the Cupertino Union School Board, said last week that the program was canceled before it ever began, after complaints from parents who saw the slides.

However, Superintendent Stacy Yao said Monday that the lesson was in fact introduced to students during one session, where students were asked to create an “identity map.” It was then suspended because of parental complaints.

“Parents reacted to the slidedeck and the lesson did not continue after the initial introduction,” she wrote in an email.

Liu said: “The lesson provided to the 3rd-grade students was not age-appropriate and not part of the district’s curriculum.”

Gabe Kaminsky at The Federalist called up the Post for comment, and communications director Shani George offered Orwellian boilerplate: "This story was accurately and fairly reported [!], and we stand by it."