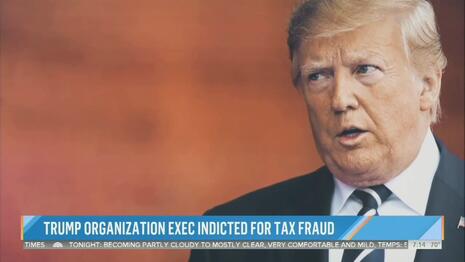 The Washington Post splashed the story across the top of the front page with a banner headline: "Prosecutors allege fraud at Trump firm." Four reporters were needed! The lede said only “prosecutors” were charging the former president. Right before the jump to inside the paper, there’s a quote about Trump’s allegedly “sweeping and audacious illegal payments scheme,” said a prosecutor for Manhattan District Attorney Cyrus Vance (D in parentheses).

There was also a news analysis by Josh Dawsey: “Indictments become Trump’s latest rallying cry.” These two, and a third story on Trump giving House democrats a peek at his finances, take up most of page A8 and A9.  The only real rebuttal came from the Trump team crying witch hunt. There’s no critic outside of that orbit.

The New York Times has Trump's Business Charged in 'Audacious' Tax Scheme: Prosecutors Describe 15 Years of Hiding Executives' Luxury Perks and Bonuses.  Three reporters!  The Times also has a news analysis on the Trump prosecution titled "Striking at Heart of Ex-President's Image." Like they always portrayed him as a straight shooter? These two stories engulf all of page A-12. Again, the only rebuttal was Trump’s.

But they quoted the Trump organization claim that “criminal cases centered on fringe benefits were extremely rare. Indeed lawyers with expertise in tax crimes told the Times they could think of no recent example in a criminal case.” This admission of very selective prosecution? That's in paragraph 27.

There was no (D) on the front page for DA Cyrus Vance. In paragraph 29, they call him “a Democrat who twice beat Mr. Trump at the US Supreme Court in a battle to obtain the former president’s tax records.” Late in the piece, the Times notes Vance is not seeking re-election, so this “will arguably be the most enduring part of his legacy.”

USA Today did this too, front page story headlined "Charges muddy Trump's future," which sounds like 100 newspaper headlines. It could be "Journalists muddy Trump's future," to be sure. Their three-reporter story (and a second story) extended to cover most of page 6A, which is a long read for "McPaper." At least they found a critic of the prosecutors outside of Trumpland: that rare conservative CNN analyst Scott Jennings, who was quoted that this will be a "confirming event" for Trump fans that he's being persecuted.

The networks played the same game. ABC Good Morning America anchor Whit Johnson hyped: “Now to that bombshell indictment of former president trump's company and its CFO for what prosecutors are calling a sweeping and audacious scheme to hide income and illegally avoid taxes.” Reporter Terry Moran never said anything more specific than “Manhattan district attorney.” Trump was quoted attacking “radical left” prosecutors. ABC even brought on legal analyst Dan Abrams, and when he was asked about Trump’s witch hunt claims, never explained who Vance was, or his party.

ABC's GMA on Friday touting the "bombshell indictment" of the Trump organization. "Prosecutors" allege a "sweeping and audacious" criminal scheme, but no mention the prosecutor is a Democrat...an elected Democrat. pic.twitter.com/76jD1Ju4LU

On CBS This Morning, reporter Jeff Pegues cited a “grand jury in Manhattan,” but no mention of Vance or his party. They also had Trump attacking “radical left” prosecutors…and they had their own comedian mocking Trump as evil.

"CBS This Morning" promoted Stephen Colbert comparing Trump to super-villain Thanos in their "Eye Opener" at the top of Friday's program. pic.twitter.com/LKNFosYf9z

On NBC’s Today, Hallie Jackson mentioned the Manhattan DA and New York’s Attorney General, but not their party affiliation. NBC aired a soundbite of Donald Trump Jr. on Fox News saying prosecutors were focused on their political enemies. But NBC went to extremes to avoid naming any political names.

Like the others, NBC's "Today" can only mention "prosecutors" or the "Manhattan DA," no mention of the (D). Hallie Jackson even runs a quote from the DA's office that has no name on it! Why must the press be so nebulous about who is going after Trump? pic.twitter.com/utNneGZSZJ