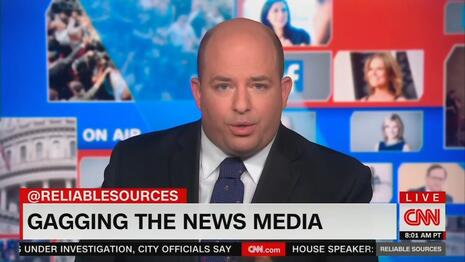 The arrogance of the liberal media can be measured by their dismissal of all conservative criticism as “bad faith” attacks on the press. Assuming that conservative critics are dishonest and disreputable cynics is a common trope of CNN’s Brian Stelter when liberal journalists become mired in scandal.

“These bad-faith attacks on the press began to rise most recently in the 1960s and 70s, led by a concerted effort among conservative journalists and critics,” Lerner argued. “Along with efforts to create a conservative counter-balance to the mainstream press, they engaged in attempts to delegitimize legacy news organizations by painting them as irredeemably biased. This strain of bad-faith criticism is alive and well today.”

“Good faith” criticism, he insisted, is “based on the premise that a strong, independent press, responsive to the needs of an engaged citizenry, is essential to the functioning of a democratic society.”

There are several obvious flaws in this argument.

First, conservatives don’t see “legacy news organizations” as “independent.” They are not watchdogs of both parties. They are savage destroyers of one party and cuddly defenders of the other. They are not “responsive to the needs” of all citizens, but to the political needs of one party. This argument is somehow in “bad faith” regardless of the evidence.

Second, conservatives dare to argue that the “press” is not synonymous with the “mainstream press.” Lerner’s side always implies that there is not a liberal media and conservative media, but a mainstream media and an extreme media.

Third, criticizing liberal news organizations is part of the “functioning of a democratic society.” We want a vibrant press, but media criticism is not anti-democracy. It defines democracy.  Liberals like Lerner believe that democracy functions best when “legacy media” never lose public trust, no matter what kind of partisan hackery they foist on the public.

Take the recent network coverage of voting-integrity laws, which the Democrats despise, and surprise! So do the “strong and independent” networks.

Rich Noyes of the Media Research Center studied ABC, CBS and NBC evening news coverage from March 1 through June 10, and identified nearly 52 minutes of airtime spent on Republican-sponsored state election laws. That compares to just 2 minutes, 40 seconds for the Democrat-sponsored federal legislation called the “For the People Act.”

Then there’s the tone of this “news” reporting. Taking into account statements from reporters, anchors, and non-aligned sources (soundbites from voters and experts), but excluding identified Democrats and Republicans, Noyes found just three positive comments about the Republican-sponsored laws versus 75 negative statements.

It was routine to categorize these laws as a conspiracy to “restrict voting access.” Some of these reporters could be described as “delegitimizing” the Republicans. “It’s the new election law that many tonight are calling racist,” ABC’s Steve Osunsami said about the Georgia law on March 26. “Black and brown voters are screaming that this is voter suppression.”

That “screaming” is treated not as one side of the argument, but as the Right Side of History, the heroic forces organizing for democracy and against “systemic racism.”

Liberals imagine that “legacy news organizations” must never be “delegitimized” by calling them partisan, even as these “news” people seek to delegitimize every politician and critic they want to defeat. Their “independent press” has sought to delegitimize the Republicans, the police, our border guards, our military, our national anthem, even the “triggering” flag.