Everyone understands that the news media prioritize bad news: planes that crash, not planes that land; tornadoes and floods, not sunny and dry. You get the picture. So it’s a window into the media’s mindset when you see which of this year’s election legislation the TV networks have pounced on as worthy of major coverage, and which they’ve barely mentioned. 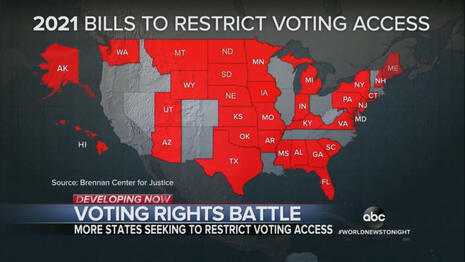 An analysis of ABC, CBS and NBC evening news coverage from March 1 through June 10 found nearly 52 minutes of airtime spent on a variety of Republican-sponsored state election laws. That compares to a meager 2 minutes, 40 seconds for Democrats’ so-called “For the People” Act, national legislation that would override a host of state election laws, including popular voter ID rules, in favor of a national scheme that would make voting less secure.

On ABC, CBS and NBC, our study found that the coverage was relentlessly — almost unanimously — negative. Taking into account statements from reporters, anchors, and non-aligned sources (such as soundbites from voters and experts), but excluding identified Democrats and Republicans, we found just three positive statements about the Republican-sponsored laws, vs. 75 negative statements. 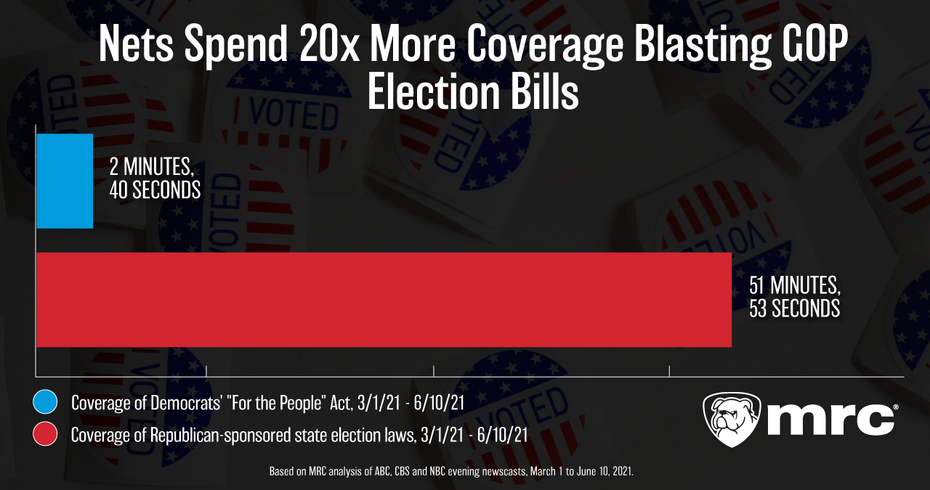 That translates into a stupendous 96% negative coverage for the GOP-sponsored laws.

As for the Democrats’ “For the People” Act, there was no debate. No controversy, nothing to see here. 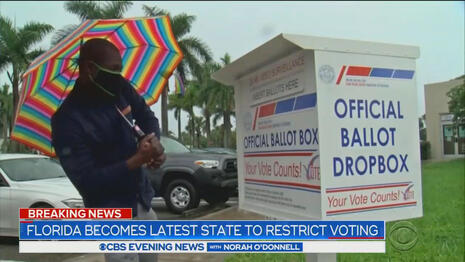 The networks’ characterization of the various Republican laws could have been written by the White House or the DNC. The evening newscasts routinely told viewers that the newly-passed Republican laws are “restrictive,” even though none of the new rules would preclude any eligible voter from voting. Instead, via early voting, absentee voting and voting on Election Day, citizens have multiple opportunities to exercise their franchise.

NBC Nightly News anchor Lester Holt on April 6 characterized it as “Georgia’s GOP-backed new law restricting voting rights.” On May 6, CBS’s O’Donnell was back to report how “the NAACP says it’s suing the state of Florida for its new voting restrictions law signed today.”

Then on May 31, ABC’s Kenneth Moton labeled a proposed Texas law “one of the most restrictive voting bills in the country.”

Never once did the networks scold Democrats for their inflammatory hyperbole about “Jim Crow” laws. Instead, TV reporters helped further the nasty narrative. “It’s the new election law that many tonight are calling racist,” ABC’s Steve Osunsami said about the Georgia law on March 26. “Black and brown voters are screaming that this is voter suppression.”

Viewers would have been helped if ABC had factually and carefully debunked those wild claims of “voter suppression,” as NewsBusters did a few weeks ago. But reporters instead chose to frame the story as one of Republican bad guys vs. Democratic good guys.

On the flip side, there has been virtually no coverage — and zero criticism — of the Democrats’ “For the People Act,” which would destroy a host of state election rules. National Review’s Rich Lowry explains how the law is “objectively terrible legislation”:

The core of the bill forces every state to adopt automatic voter registration, same-day registration, no-excuse absentee balloting, and early in-person voting, among other mandates.

The case that the bill will save democracy depends on the myth that voters are being turned aside in droves by onerous restrictions in the states — even though turnout in last year’s presidential election was the highest since 1900.

States such as Georgia have tightened up their rules since the election, in part in reaction to Donald Trump’s ongoing campaign of disinformation, but these provisions are in many cases improvements and certainly don’t constitute “Jim Crow 2.0.”

If the goal is to increase confidence in the electoral system, by the way, making it harder for states to maintain up-to-date voter rolls (as H.R. 1 does) while wiping out ID requirements is emphatically not the way to do it.

But while network news viewers heard relentless criticism of the Republican-sponsored measures, they heard nothing about these problems with Democrats’ “For the People” Act. Even when Democratic Senator Joe Manchin joined the opponents of H.R. 1, the evening newscasts allocated no time for his rejection of the proposed law.

You couldn’t imagine coverage more one-sided than this. It proves, once again, that far from being independent, the “news” media are among the most reliable soldiers in Democrats’ political operation.