At the top of the front page of Friday's New York Times, they splashed head shots of 64 children killed in the latest Israel-Hamas war. "They were just children" was the headline. At the bottom of the front page, the paper worried about being able to kill children in the womb:

As a case before the Supreme Court threatens Roe vs. Wade, many activists say the president needs to be bolder in defending reproductive rights. PAGE A15 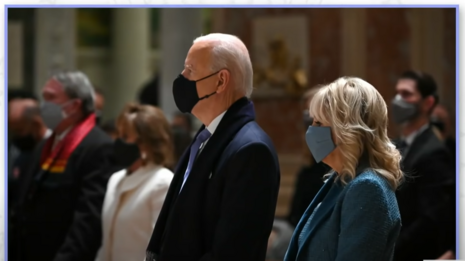 Inside, a story by Lisa Lerer was headlined "President's Silence on Abortion Rights Worries Advocates." At least online, the headline said it "Worries Liberals." There two pictures: One of a receptionist at "the only abortion clinic in Mississippi," and the other was Joe Biden in a mask walking past an IHS cross (presumably at his home Catholic parish in Delaware.)

"Silence" isn't accurate. It's too dramatic. They're upset he's not more "robust" in his abortion rhetoric. The Times links to its video of Biden signing an executive order reversing restrictions on funding international abortion organizations, where he talks of insuring women's "access to affordable health care as it relates to reproductive rights." These are the usual anodyne statements used by the liberal media.

The New York Times doesn't worry about the Democrats going too far on abortion, far enough to cause Biden to drop the last facade of defending the Catholic conscience and back taxpayer-funded abortions. Lerer was all about channeling how abortion advocates still want more, always more:

Despite the urgency felt by much of his party, President Biden has said little about abortion publicly while in office. In fact, he hasn’t said the word itself — an avoidance so noticeable that one advocacy group has created a website tracking his reluctance, DidBidenSayAbortionYet.org.

Many activists fear that Mr. Biden’s personal discomfort with the issue is keeping him from leading the Democratic Party into a more offensive position on abortion rights, both through more aggressive policymaking and leveraging the agenda-setting power of the presidency....

“If you’re unable to say the word, you’re also going to have trouble making sure that the people who are most impacted get the care and the protections that we need,” said Renee Bracey Sherman, an abortion rights advocate who started the website monitoring Mr. Biden’s reticence. “To me that’s not a champion. That is not someone who is really even trying to show up for people who need abortions.”

They were also upset abortion didn't make his pseudo-State of the Union speech.

Lerer pointed out that Biden was "far less vocal" than rivals like Kamala Harris in defending abortion rights, comparing pro-life laws to The Handmaid's Tale. We get the story that Biden's oh-so-Catholic:

“If one were to look at him as a Catholic and his attendance at Mass and the way he looks at life and death and everything else, culturally he’s like 1,000 percent Catholic,” said Jo Renee Formicola, a professor of political science at Seton Hall University who studies the relationship between the Catholic Church and American lawmakers. “He’s very, very Catholic, but when it comes to being political, he’s much more pragmatic than Catholic.”

To steal from PolitiFact, this is "Pants On Fire." He's not "1,000 percent Catholic" on life and death issues. If he was, he never would have been nominated for president, let alone elected.