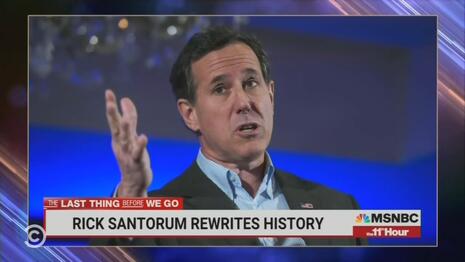 In the latest NewsBusters Podcast we are sad to report that Chris Cuomo can’t be canned, Jeffrey Toobin is still in Zoom limbo, but CNN decided to terminate the contract of conservative contributor Rick Santorum. This delighted the censorious leftists on Twitter, who cannot stand a dissenting point of view on CNN.

On his show Reliable Sources, CNN host Brian Stelter was pleased “their voices were heard.” Native American journalists and activists found a pretext to remove one of the few remaining conservative contributors on CNN. Most CNN "Republicans" are basically Democrats now. Ana Navarro tweeted her delight that Santorum was removed.

We also discuss George Will returning to ABC's This Week to characterize the Republicans as "a political party defined by the terror it feels for its own voters." Then he insisted that "I would like to see January 6 is burned into the American mind as firmly as 9/11 because it was that scale of shock to the system."