Column: Joe Manchin Is Not the Media's McCain

The bad news for liberals arrived on the front page of the May 18 Washington Post, under the mild-mannered headline “Hopes dim for Democrats’ bills on election oversight.” That’s a nicer headline than “It’s Toast.”

Post reporter Mike DeBonis began by reporting that Senate Majority Leader Charles Schumer has approached the “For the People Act” federalizing elections with the motto “Failure is not an option.” DeBonis wasn’t as dainty as the headline writer: “But failure is very much an option – it is, in fact, the most likely one.” 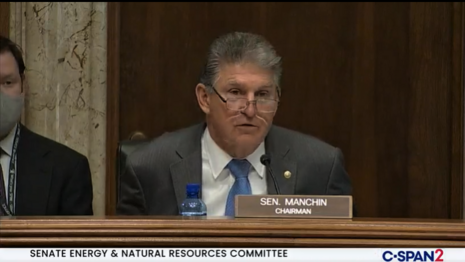 There is one central figure in this bill’s demise. Inside, the Post headline was “Manchin seen as key to election bills’ passage.” Sen. Joe Manchin is the only Senate Democrat that has not co-sponsored the bill and “has expressed serious misgivings” about it. One part of that is Manchin doesn’t want “any type of voting legislation without Republican buy-in.”

Naturally, the network evening news programs that night all avoided this front-page Washington Post death notice, and the dissenting voice at the story’s heart. It’s not like they ignored Congress. ABC, CBS, and NBC all found time to report on radical Rep. Rashida Tlaib pressing Biden on a Detroit tarmac to stick it to Israel. On CBS, Ed O’Keefe relayed “one of the biggest critics of his response, Michigan Democratic Congresswoman Rashida Tlaib, who has family in the West Bank, told the President that Palestinian human rights are not a bargaining chip, and must be protected.”

This is where you can sense that the only dissent liberal media outlets seem to enjoy comes from the left of their so-called “mainstream.” Manchin isn’t their idea of a hero. They also don’t want to disparage him as a villain....since he could always switch parties and upset their whole 50-50 apple cart.

Consider a contrast. In July of 2017, ailing Sen. John McCain was glorified by journalists for walking onto the Senate floor and dramatically putting a thumbs down on repealing Obamacare. “He had just derailed the fevered Republican effort to undo the Obama-era health care law,” wrote New York Times reporter Carl Hulse. “It was a stunning moment that will be long remembered in the Senate, a flash of the maverick John McCain, unafraid of going his own way despite the pleas of his fellow Republicans.”

How they love “maverick” Republicans! On MSNBC, disgraced anchor Brian Williams gushed: “Much was made of that moment, a moment of moral courage, a man staring down his own mortality yet again, not the first time in his life. But let’s also talk about the courage of Murkowski of Alaska and Collins of Maine, because without those two women, there is no moment like that for John McCain. My question to you: Is that kind of courage, for people cheering them on, going to be contagious?”

Two months ago, the New York Times disparaged Sen. Kyrsten Sinema for making the same thumbs-down gesture on a Democrat bill hiking the minimum wage. Brian Williams disdained Sinema as a  flip-flopper: “seven years ago, she posted this on social media. ‘A full- time minimum wage earner makes less than $16,000 a year. This one’s a no-brainer, tell Congress to raise the wage.’ That's proof that the view is different from the cheap seats.”

Like most Democrats, journalists aren't happy their "blue wave" didn't crest. Their grand power grabs are failing, from voting laws to Supreme Court expansion. Republicans should be pleased as much as the media are disappointed.