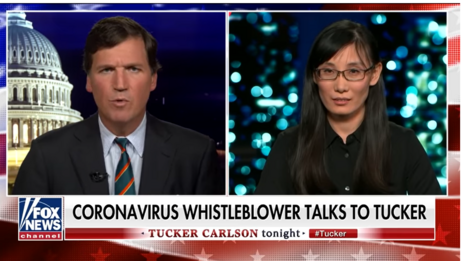 Andrew Kerr at the Daily Caller reported that PolitiFact posted an Editor's Note on May 17 quietly retracting a "Pants On Fire" it gave to Tucker Carlson last September for a supposedly "debunked conspiracy theory" about the origins of the coronavirus in Wuhan, China.

At the very least, this underlines how embarrassing it can be to light your judgmental "pants on fire" on speculation about something controversial that is still unknown. The note reads:

Editor’s note, May 17, 2021: When this fact-check was first published in September 2020, PolitiFact’s sources included researchers who asserted the SARS-CoV-2 virus could not have been manipulated. That assertion is now more widely disputed. For that reason, we are removing this fact-check from our database pending a more thorough review. Currently, we consider the claim to be unsupported by evidence and in dispute. The original fact-check in its entirety is preserved below for transparency and archival purposes. [Emphasis added.]

This also underlines that PolitiFact often relies heavily on "experts" and "researchers" for the purported certitude of their "fact checks." They find experts that conveniently line up against Fox News hosts and other conservatives on politically controversial topics -- even in the fall of a presidential election year. It's "safe" to retract it now, when stopping the spread of this argument on the number-one issue in the presidential race seemed important on September 16, with early voting starting on September 19 or 20 in the first six states.

Kerr noted PolitiFact’s Daniel Funke (now with the fact-check team at USA Today) had linked to a statement published in the journal Nature Medicine in March 2020 by a group of five virologists who claimed "Our analyses clearly show that SARS-CoV-2 is not a laboratory construct or a purposefully manipulated virus." Funke added "Since that article was published, public health authorities have repeatedly said the coronavirus was not derived from a lab."

Longtime New York Times science reporter Nicholas Wade wrote in May that despite the Nature Medicine statement being “full of absurdly large holes” and “grounded in nothing but two inconclusive speculations,” it successfully “convinced the world’s press that SARS2 could not have escaped from a lab.”

PolitiFact retracted the Tucker Carlson fact check after it published a lengthy piece on Monday on the origins of COVID-19 that acknowledged that some virologists, such as Rutgers University professor Richard Ebright, argued available scientific evidence supports both a natural origin or a lab accident origin.

PolitiFact's animus against Tucker Carlson is obvious from the fact-check ratings: Zero True, one Mostly True, one Half True....and then four Mostly False, four False, and six Pants on Fire. That's after they retracted Funke's COVID Pants on Fire. Their true-to-false tilt is 14 to 1.