On Sunday morning's Inside Politics show on CNN, host Abby Phillip acknowledged that "searing visuals" of problems like gas lines and inflation could bring political peril to Democrats by reminding older voters of the Jimmy Carter years, which Republicans will underline as Bidenomics.

ABBY PHILLIP: Domestically here in the United States, you have these really, I think, searing visuals. If you’re of a certain age, particularly it brings you back to — I think Republicans would love to bring people back to the Carter years. But these gas lines, it is a psychological problem. Maybe it is temporary, but for the American public, there is something psychological about hearing about inflation and seeing gas lines and literally going to the pump in certain Southern states and not being able to get gas.

Jackie Kucinich, Washington bureau chief of the snarky liberal Daily Beast website (and the daughter of former Democrat presidential candidate Dennis Kucinich) immediately suggested it's too early for imply Democrats will suffer for this "in the long run."

That's funny -- CNN and the rest don't tend to wonder skeptically if the fuss over Trump and Liz Cheney will hurt Republicans "in the long run"...

JACKIE KUCINICH: Yeah, and I think that is one of the reasons that you had the executive order dealing with cybersecurity because this was a breach, and that is one of the reasons that this problem started. But every time there is a Democratic president, there are -- Without this current crisis going on with gas -- gas prices become an issue in the summertime. You could set your watch by it. Whether this actually hurts them politically in the long run, I don’t think we know the answer to that question yet.

I think resolving this quickly, which is what the Biden administration is trying to do right now, is probably a good idea. And a way to mitigate some of that -- some of the fallout. But what the long-term effect of this, I think that remains to be seen. 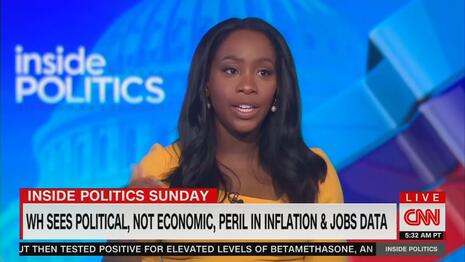 Phillip said this gas issue could be very temporary, "but the inflation issue is real if you look at the prices of goods, it is going up. In small percentage, but it is significant and people feel it in their pocket books and Republicans want to use this as a political tool against the Biden administration. But are they actually doing that or are they too busy dealing with their own internal political drama?"

Politico's Melanie Zanona said "That is why they say they kicked out Liz Cheney. So they could start focus on attacking the Biden administration."

As if the media is going to let them stop talking about Liz Cheney.