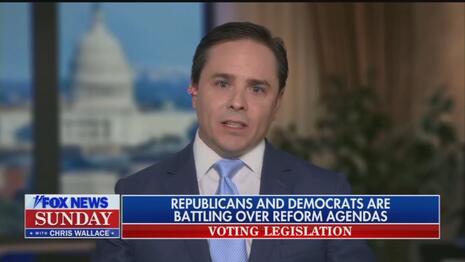 Holmes said this: "I've heard it a couple times on this program, that the idea that they've criminalized giving people bottles of water. They have not. What is in the statute, what is absolutely clear, is that they're preventing political organizations from giving people in line things: meals, water, what have you. Water is and should be provided at the polls for people who are standing in line."

Chris Wallace aggressively pushed back on Holmes as well. Yes, it would seem odd that handing someone a bottled water or a granola bar would change someone's vote, or that someone would be fined $1,000 for it. But it gives the appearance of tiny little bribes.

PolitiFact’s summary of the controversy actually acknowledges the Holmes distinction on the “controversial” Georgia law:

But they’re upset that “voting rights advocates” (liberals) are being shamed for helping the “underserved” at overcrowded "nonwhite" polling locations:

Voting rights advocates routinely organize food and water distribution near voting sites where residents sometimes have to wait in line for hours to vote, often in nonwhite communities, where polling places are more crowded. Some of the larger events are organized by those with ties to the left, although they make the food and water available to anyone.

Sherman concluded there was barely a "kernel of truth" in the Holmes quote:

SB 202 makes it a crime for people — and not just people from political organizations — to hand out food or bottles of water within 150 feet of a polling place or 25 feet of any voter standing in line.

The only kernel of truth is that the law has a sentence which allows poll workers to make available "self-service water from an unattended receptacle to an elector waiting in line to vote." But just because poll workers can make self-service water available, doesn’t mean they are required to come up with a way to make water accessible to voters in every line at every polling site. Also, people could hand out water or food to voters outside the 150-foot and 25-foot boundaries.

We rate this statement Mostly False.

Holmes offered a Twitter thread in his own defense:

Here’s how the inquiry works: So they came at me with the same omission of the specific language in the statute that speaks to water being provided at a polling place, as if I’m some idiot who doesn’t do his homework. When I cite their omission all of a sudden the goalposts move.

Michael Duncan did as well:

PolitiFact is a misinformation site that churns out garbage like this to save Democratic talking points.

I’ll explain how it works. https://t.co/Ym3wsqkx2u

When Politifact was founded in 2007, their leaders visited me in person to recruit me as one of their "go-to" fact-checking sources.

I eventually quit working with them when it became clear that my role was to provide conservative cover for partisan-left fact checks. (1/3) https://t.co/rSgDn3lngh