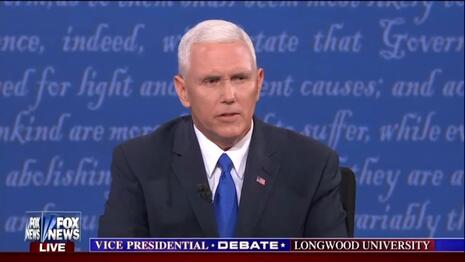 The liberals at PolitiFact haven’t issued a “Truth-O-Meter” rating on Kamala Harris since last September 24, but they’re hammering the last vice president, Mike Pence, for his claims at the Daily Signal about the voting provisions of H.R. 1.

On March 5, Amy Sherman tagged Pence as "False" for writing the bill would mean “that millions of illegal immigrants are quickly registered to vote."

Also on March 5, Amy Sherman did a roundup on criticisms of H.R. 1 in which she repeated both checks on Pence, and also summarized a series of "fact checks" on Donald Trump, Republican Reps. Elise Stefanik and Doug LaMalfa, and "Act for America, a conservative political group."

The liberal spin gets more intense on their Twitter feed:

Opponents of a voting rights bill would have you believe that it will allow murderers, teenagers, welfare recipients and immigrants in the country illegally to vote en masse. These attacks on the legislation are rife with misinformation. https://t.co/AW6R0BGHiz pic.twitter.com/b6335YRrS5

Notice from this roundup that there's apparently no such thing as a factually deficient liberal claim anywhere on H.R. 1. Instead, liberal groups that are advocating in favor of H.R. 1 like the Campaign Legal Center and the Brennan Center are the supposedly independent "experts" that "correct" the conservatives.

Hans Von Spakovsky of the Heritage Foundation responded to the CNN claims (and by extension PolitiFact) on the Daily Signal.

On registering illegal immigrants to vote:

The complex sections of HR 1 on automatic voter registration require numerous state and federal agencies to send information on individuals to state election officials so they can be registered.

Many state and federal agencies don’t have citizenship data on the individuals they deal with. In fact, most “public secondary schools” and “institution[s] of higher learning” that are included in this automatic voter registration requirement studiously avoid getting citizenship information on their students, especially illegal aliens.

So it is highly likely that these schools will send information on all of the individuals they deal with, regardless of their citizenship status, to state election officials. Moreover, HR 1 specifically states that no alien can be “prosecuted under any federal or state law” or “adversely affected in any civil adjudication concerning immigration status or naturalization” due to being automatically registered.

He noted the "so-called mainstream media" are "apoplectic" over Pence's article, but he was "absolutely correct" in lamenting the bill as trampling on free speech and making fraud easier.