The Associated Press rang in the new year on Saturday with the Democratic spin on the Georgia Senate runoffs. The Republicans are engaging in a risky strategy of “hardline” pitches like calling their opponents radical and socialist. The headline?

Reporter Bill Barrow began by noting the Republicans are still embracing Trump, and then: 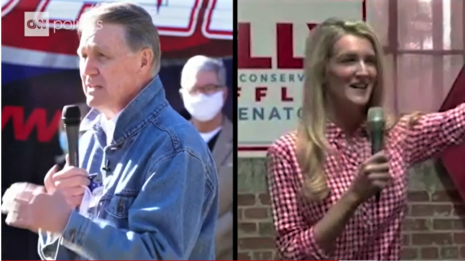 The Georgia Republican is running television ads ahead of Tuesday’s Senate runoff elections that lambastes her opponent, the Rev. Raphael Warnock, as “dangerous” and “radical.”

In the final days of campaigns that will decide control of the U.S. Senate, the Republican incumbents are appealing to the most conservative part of the electorate. Their steady embrace of the hard-right, Trump wing of the GOP — even repeatedly refusing to acknowledge Trump’s defeat — and their caricatures of the Democratic challengers may seem like a risky approach in a state that narrowly voted for Democrat Joe Biden for president in November after years of steady Democratic gains.

Using words like "radical" and "socialist" is a "caricature," liberal reporters often say. But even worse, Barrow found a Republican to argue the question proposition that talking about "socialism" is not "talking about ideas."

“The president resonates with a lot of people, and so do the buzzwords, so you hear ‘Trump’ and ‘socialism’ a lot,” said Michael McNeely, a former vice chair of the Georgia Republican Party. “I wish we lived in a society where people talked about ideas, but that’s just not where we are.”

Then Barrow turned to how delighted the Democrats are that they're being accused of being socialists (yeah, right):

Democrats are fine with the GOP senators’ decision to run as Trump Republicans and use exaggerated attacks. Opposition to the president has been a unifying force among their core supporters, and Democrats believe Republicans’ overall tenor falls flat with voters in the middle.

“We talk about something like expanding Medicaid. We talk about expanding Pell Grants” for low-income college students, Ossoff said at a recent stop in Marietta, north of Atlanta. “David Perdue denounces those things as socialism?”

Speaking of exaggerated attacks, Barrow's story ignored Ossoff claiming Kelly Loeffler was campaigning with a Klansman, which even CNN fact-checked as False. Somehow the badly disguised Democrats running the "AP Fact Check" has yet to locate that.

Big crowd this morning for an Atlanta drive-in rally for Raphael Warnock in Georgia with a few days of early voting left ahead of Jan. 5 Senate runoffs. pic.twitter.com/IP36WOYB1k