Canadian prime minister Justin Trudeau has been celebrated in American media as a socialist dreamboat, often compared in progressive sex appeal to our own Barack Obama. This broke out again (to conservative mockery on Twitter) when Politico reviewed the year in Canada with a reflection on how Trudeau's beard was capital-S "Significant: 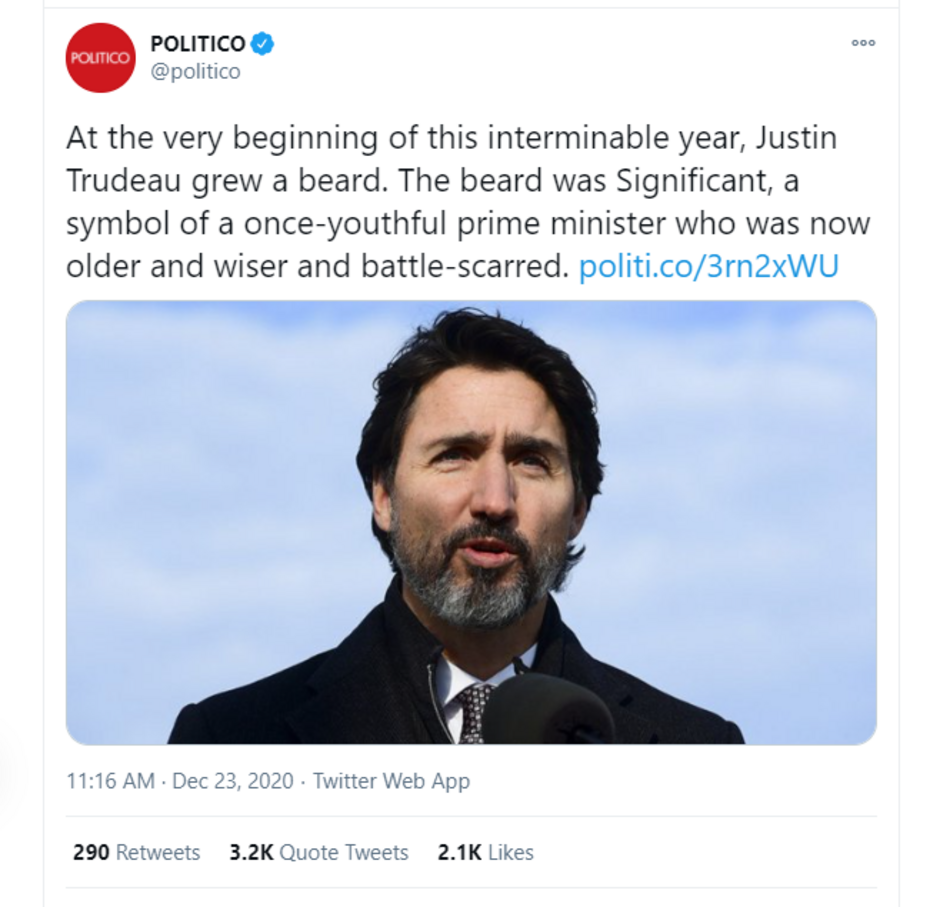 Ted Cruz asked "Tell me, why is 'Significant' capitalized?"

Daily Caller asked "Is this journalism or fan fiction...?"

Cam Edwards, whose beard is headed for ZZ Top territory, joked "That is *not* a Significant beard."

And Joe Gabriel Simonson made it personal:

my mom: you need to shave, i want to see your face

me: The beard is Significant, a symbol of a once-youthful prime minister who was now older and wiser and battle-scarred.

Politico Canada's Maura Forrest wasn't entirely complimentary, but this gurgly clickbait prose is how they tried to attract readers:

At the very beginning of this interminable year, Justin Trudeau grew a beard. The beard was Significant, a symbol of a once-youthful prime minister who was now older and wiser and battle-scarred. Many headlines were written. It was a simpler time, when we had nothing better to do than debate the merits of facial hair as an indicator of gravitas. But beard or no, this year has changed Trudeau’s image....

Way back in the before times, those battles seemed to be setting the stage for Trudeau’s second mandate, given they embodied all the issues that were most important to him: climate change, Indigenous reconciliation, natural resource development....

The image: Some argue Trudeau grew into that beard this year. In the Toronto Star, Chantal Hébert claims Trudeau has become more “cold-blooded,” while the Liberal government’s “days of being associated with unicorns and rainbows are definitively behind it.” In Maclean’s, Shannon Proudfoot reminds us that Trudeau will turn 50 next year and will likely head into his next election campaign “as a grizzled veteran, and not some impetuous wunderkind.” PM photographer Adam Scotti has published this series of photos of 2020, including several of Trudeau looking very tired.

The record: But if Trudeau’s image has been altered for good, much of what he’s promised to achieve sits where he left it in March.

The socialists are still not impressed.