On Tuesday, the “fact checkers” at Snopes ardently defended Gov. Andrew Cuomo by attacking an accurate tweet as "Mostly False." The headline was:

The correct answer is Yes. It came from a Good Morning America interview on November 9. Tom Elliott of Grabien tweeted: @NYGovCuomo says it’s “bad news” Pfizer’s Covid vaccine came during the Trump Admin; says he’s going to work w/ other governors to “stop” distribution “before it does damage".

They also provided the transcript, which proved his summary was accurate:

STEPHANOPOULOS: We were talking yesterday about the importance of vaccine distribution in the next two months. What do you make of this news?

CUOMO: Well, it’s good news-bad news, George. The good news is the Pfizer tests look good, and we’ll have have a vaccine shortly. The bad news is that it’s about two months before Joe Biden takes over, and that means this administration is going to be implementing a vaccine plan. The vaccine plan is very important and it’s probably the most ambitious undertaken since COVID began. Just to put it in focus, we did 120 million COVID tests in this nation, over seven months — scrambling, doing everything we can. We now have to do 330 million vaccinations, maybe twice. My state does more testing than any state in the United States, we did 12 million tests. We have to do 20 million vaccines, and the Trump administration is rolling out the vaccination plan, and I believe it’s flawed. I believe it learns nothing from the past. They’re basically going to have the private providers do it, and that’s going to leave out all sorts of communities that were left out the first time, when COVID ravaged them...

But you have two months and we can’t let this vaccination plan go forward the way the Trump administration is designing it, because Biden can’t undo it two months later. We’ll be in the midst of it. And I’m going — I’ve been talking to governors across the nation about that — how can we shape the Trump administration vaccine plan, to fix it or stop it before it does damage.

Somehow, Dan MacGuill of Snopes thought Cuomo was being factually mangled. He summarized the questionable claim as: “On Nov. 9, 2020, New York Gov. Andrew Cuomo said it was "bad news" that Pfizer had developed what appeared to be a successful COVID-19 vaccine, during U.S. President Donald Trump's tenure.” Then he ruled:

Cuomo said it was "bad news" that the administration of outgoing President Donald Trump would be responsible for creating a plan for distributing a COVID-19 vaccine, because he believed they would mishandle that planning.

Cuomo did not say Pfizer's announcement of positive testing data for their COVID-19 vaccine candidate was, itself, bad news, and he explicitly welcomed that development. He also did not say he would prefer distribution of a vaccine be delayed until President-elect Joe Biden was in office; nor did he articulate the position that he was dismayed that Trump would garner credit or plaudits for being in office when Pfizer made its announcement.

Snopes is mad that conservative Senators and conservative media would put any kind of negative spin on Cuomo's remarks: 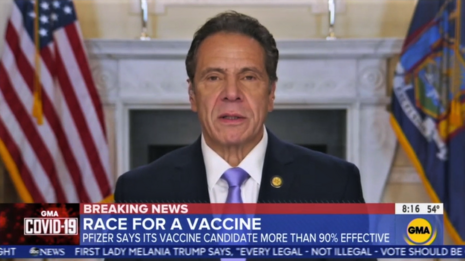 Cuomo’s remarks also formed the basis of an article on the right-wing Blaze website, whose headline read “‘Bad news’? Gov. Cuomo’s response to groundbreaking COVID-19 vaccine shows just how much he REALLY cares about human lives.” On Facebook, Fox News host and Trump ally Sean Hannity posted a clip from Cuomo’s interview, along with the headline “Gov. Cuomo: Pfizer’s Covid Vaccine Is ‘Bad News’ as It Will Be the Trump Admin. Distributing It.”

Those criticisms were premised upon misleading characterizations of what Cuomo said. Cuomo was not expressing dismay that Trump, rather than Biden, would get the credit for rolling out the vaccine. Rather, he expressed concern that the Trump administration would mishandle planning for the distribution of the vaccine whereas, in his view, a Biden administration would not.

The Blaze’s and Hannity’s characterization of Cuomo’s remarks were also misleading on a more basic level, since they described him as saying Pfizer’s announcement was “bad news,” even though a cursory look at his remarks would show that he also said “The good news is the Pfizer tests look good, and we’ll have have a vaccine shortly.”

At the time, we noted Stephanopoulos just cued up Cuomo to trash the "bad news" under Trump.

As usual, Snopes skipped over the misinformation coming out of Cuomo's mouth, even though it's plainly there in their transcript: "When you deny a problem the way Trump did, you can never solve it. And that’s true in life. The Trump administration denied COVID, so they were never ready for it. There was no mobilization of the government."

So how on Earth did we get a vaccine, Andy? Is he denying Operation Warp Speed ever existed?

This is the same Dan MacGuill who tried to defend a very misleading Biden ad, decrying the conservative media as "Mostly False" when the Democrats were Mostly False.