The networks are playing up many Biden endorsements, but this one is shocking – or maybe not. Veteran TV journalist Connie Chung, who had several turns as a reporter and anchor at CBS News – has recorded an endorsement of Biden. CBS This Morning touted it Wednesday in their “What to Watch” feature.

CONNIE CHUNG: People think we should know our place, right? Well, I'll tell you where our place is. It's in the voting booth.

DUTHIERS: We asked her why this election is different.

CHUNG: The Asian vote can actually tip the balance in key battleground states. For 35 years and one never crosses the line, but I decided if there was any time to cross the line and to not stay on the sidelines anymore, this is that moment.

Chung was on almost every network – CBS, then NBC, CBS again, ABC, as well as short-lived stints at CNN and MSNBC – but that career ended in 2006, so this is a bit like Sam Donaldson endorsing Michael Bloomberg for president after retiring.

Duthiers then surprisingly exaggerated how white the networks still are. “Chung also told us it was breathtaking to be the minority covering the Watergate hearings 47 years ago. Look at this picture of her in 1972. Our Weijia Jiang also told me, as much progress as we think we've made -- this is Weijia in November of 2019  [picture, lined up with white-male reporters] -- the fact is, we have not.” He then concluded: “To learn more about this discrimination in a new documentary, Asian Americans: Battling Bias, it airs this Friday night at 8:00/7:00 central on CBSN, our 24/7 streaming news service.”

This picture ignores the other women (including minority women) in the White House press corps, including ABC’s Cecelia Vega, NBC’s Kristen Welker and CNN’s Abby Phillip. 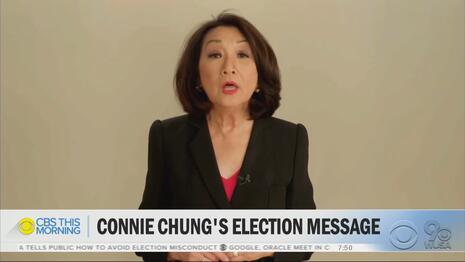 In her endorsement video, Chung says she's 100 percent Chinese, and 100 percent American, and "white people don't understand what that means." And Chung is married to Maury Povich, a white person.

Chung claimed  “As a news person, I always told you the truth, but now, I’m going to break a rule in journalism. I’m going to tell you what I think.” That's hilarious.

This is not the first time Chung abandoned neutrality. She donated $2500 to Sen. Kirsten Gillibrand (D-N.Y.) in 2012.

She said “I covered Joe Biden when I was a reporter in Washington. He’s a good, decent, smart and honest man. I think he really cares about Asians. He cares about us."

Then she went after Trump: “I so want our peaceful country back, don’t you? We need solutions to the hate and the violence and the racism and sexism, our lost jobs. Small Asian businesses are also lost. Fires, floods, health care, schools, education – all of these things need solutions and especially, this crazy coronavirus. President Trump, shame on you! Shame on you for calling the coronavirus China virus. It costs us so much hateful discrimination!”

CBS skipped this part, for some reason.

Then came the closer: “People think we should know our place. Right? Well I’ll tell you where our place is. It’s in the voting booth . I urge you to vote for Biden and Harris. Kamala Harris is a woman, and she’s a minority. She understands."

Chung’s most famous/infamous interview was taking advantage of Newt Gingrich’s mother as the Republicans took over the House in January 1995, asking her to spill the beans, “just between you and me,” on what Newt had called Hillary –  a “bitch.” Then it went on national TV, despite Chung’s promise. This was even mocked on Saturday Night Live.