If something demonstrates the hilarity of Brian Stelter’s CNN hootenanny – bizarrely titled Reliable Sources --  it’s airing a seven-minute segment insisting President Trump is a fascist like Adolf Hitler, and at the end, asking the question “How can fact-checkers break through at this point?” Exactly.

Down in the Stelter Fallout Shelter, America is forever on the brink of an American Holocaust, or at least until the Democrats are back in the White House. His most ridiculous guest on Sunday was Yale professor Jason Stanley, a Bernie Sanders and Elizabeth Warren donor.

BRIAN STELTER: So let's talk about that other "F" word, one that doesn't talk about enough. Jason Stanley is a professor of philosophy at Yale University. He's the author of How Fascism Works: The Politics of Us and Them. Jason, I think we should start with, you know, the first day of class, right? The definition of fascism.

JASON STANLEY: Fascism is a cult of the leader who promises national restoration in the face of supposed humiliation by immigrants, minorities, and leftist radicals. The fascist leader creates panic and fear about a takeover by Marxists and leftists and presents himself as the only solution.

STELTER: You've been talking about this for years, of course. You wrote your book a couple years ago. I think only recently I started to see you break through in the media, you know, in national interviews. Do you think the press has been tiptoeing around this for too long and it's finally waking up to a fascist movement in America?

STANLEY: Absolutely. The process is enthralled to what we're all enthralled of. America is a special country. We represent democracy. What happens in every other country surely couldn't happen here -- but it can.

On screen, CNN asked "Is the media too timid about covering signs of fascism?" In the alternate reality that is CNN, the media is forever too timid with Trump, and somehow never suggests he's a danger to democracy. (You may laugh now.) 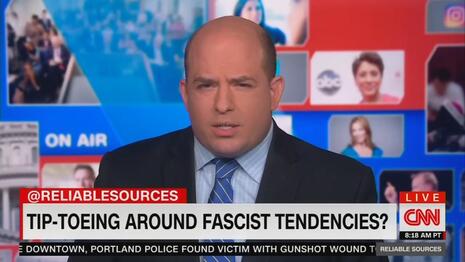 STELTER: And how far down the road would you say it is happening?

STANLEY: Well, we don't have a fascist regime, but arguably, Trumpism is something akin to a fascist social and political movement. And at the very least, we have massive use of fascist tactics. We've got militias roaming the streets.

We have -- we have one of our political parties turning into a cult of a leader. The RNC platform was just whatever Trump wants. That's an extremely worrisome sign.

Here you can see why the Left could be portrayed as rooting for disorder in the streets. It feeds their narrative about "fascist tactics."

STELTER: So I'm going to say to you, I'm going to say to you, let's prove it. I want you to prove it, show us rather than tell. In your book, you have ten pillars of fascist politics. Let's put the first five on screen if we can and let's go through this one by one and tell me how you think these are being shown right now. The first is a mythic past, appeal to the make America great again because it's not great anymore. Number two, propaganda. Number three, anti-intellectualism. Did you see these on display at the RNC?

STANLEY: Absolutely. In Mein Kampf, Hitler talks about Germany being humiliated, the empire has been lost, there are foreigners everywhere, the liberals are taking over. Here we have Confederate monuments are under attack, our history is under attack. We're supposed to be ashamed of our history. We must restore our history in the face of this attack. So that's the mythic past. He's going to restore our glorious past, meaning the sort of white nationalist past.

STELTER: But, of course, you just said Hitler. That's a way to shut down a conversation. People are going to say, come on. Stop it, Jason.

STANLEY: I'm talking about the propaganda and the messaging, not the policies. We don't have a genocidal regime by any means, but these are tactics used across the board by authoritarians who don't intend genocide or anything like Hitler. So, there isn't a comparison here between what Trump is doing and his policies. Just in the propaganda he's exploiting, as we'll see.

Except! Except Stanley argues that the coronavirus pandemic is sort of the Holocaust, in that Trump and his followers think the weak should be sacrificed for the economy: 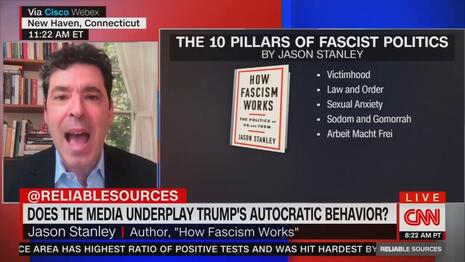 STELTER: Let's go to the next pillars. Victimhood, we see a lot of conservative victimhood in right-wing media. Law and order, well, that's the president's favorite thing. Sexual anxiety, Sodom and Gomorrah. And tell us about the tenth pillar.

STANLEY: Arbeit macht frei, work shall make you free. So, the idea here is social Darwinism. The idea is that only the fit survive, winning is the only thing that matters. Hitler's book is called my struggle, Mein Kampf. The idea is one group has emerged in struggle victorious. We can get rid of the weak. We don't need them. You know, a pandemic is something that's just going to clear the weak. They have to be sacrificed for the strength of the nation.

STELTER: But no one is literally saying that. Are you talking about what the subtext of the rhetoric is?

STANLEY: The subtext of the rhetoric, why do we have to -- you know, the economy becomes more important than lives of the vulnerable. So what we have in these liberty liberate America, free America rallies is we have people calling for -- you know, we have to return, we have to sacrifice people to the strength of the economy.

Dear Brian: Do NOT try to tell us CNN presents "Facts First." This is, plain and simple, a smear.

This smear was made possible by the advertising dollars of LegalZoom and Whole Foods Market.